New and Noteworthy---Civil War Controversies, Questions, Speculations and How To Think About Them 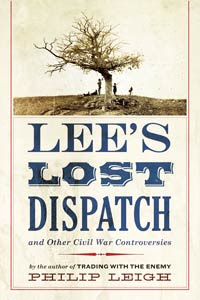 Biggest Confederate Error? Biggest Federal Error? Could the war have been preempted in January 1861? How many times was Atlanta burned?  Should Thomas have been chosen over Sherman in Spring 1864? Eleven chapters focus upon controversies with a glace in the direction of alternate histories.  Not far from the mind of the author is the question is 'if one thing had been changed'. Philip Leigh's Lee's Lost Dispatch and Other Civil War Controversies, Philip Leigh offers eleven episodes that challenge readers' understanding of  the significance of particular turning points of the war.

When contemplating alternatives to conventional conclusions and analyses, Leigh invites discussions and debates on the Confederacy's King Cotton diplomacy and fiscal policy, the Federal policy of breech loading and repeating rifles, Buchanan's choice of ships sent to relieve Fort Sumter, Salmon Chase's solutions to the Federal war debt and its relation to his daughter, her husband William Sprague, and money broker Jay Cooke.

Several chapters take relatively new paths. How did Florida become so important to the Confederacy after Vicksburg surrendered in July 1863? In 1864 at Spring Hill Tennessee were Hood, Cheatman and Cleburne victims of behind-the-Confederate lines Union spies? Was Lincoln wrong to keep McDowell's 40,000 troops out of McClellan's hands in June 1862?   Leigh suggests a logical change of one link in the chain of events and shows that much of the Civil War was contingent on a particular person reaching an ill-informed opinion or having a predisposition to dismiss information out-of-hand.

Many readers approach the American Civil with the notion that 'it happened this way' and the causes-and-effects are immutable.  Regarding reasonable possibilities, Leigh gently offers suggestions at the conclusion of most chapters.  These brief remarks offers tips on how to handle evidence, primary documents, gaps in the records, and the possibility of variations of the well-worn path of most Civil War books written for the general audience.

The narrative style Lee's Lost Dispatch and Other Civil War Controversies is clear and not complexly written.  Most general readers will find it both easy to read and enjoyable to contemplate. Leigh's previous work Trading With The Enemy: The Covert Economy During the American Civil War was similarly accessible and eye-opening.