New and Noteworthy---Spies, Scouts and Secrets in the Gettysburg Campaign 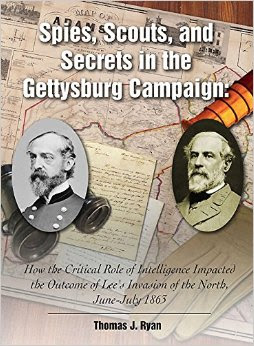 Spies, Scouts, and Secrets in the Gettysburg Campaign is very likely the first study that compares and contrasts the Confederates' and Federals' work of gathering, using, and misusing strategic and tactical intelligence during the Gettysburg Campaign. Ryan, former U.S. Army and U.S. Department of Defense intelligence analyst, presents an informed and compelling narrative that at times becomes suspenseful though, of course, the reader knows the outcome.

Having published six related articles between 2002 and 2005 in Gettysburg Magazine, the only magazine ever to focus on a single campaign and battle,  Ryan has expanded and deepened his research in the Official Records of the Civil War, primary sources, secondary sources and online sources.In the Forward, Stephen Sears notes that Lee explained the loss at Gettysburg "was occasioned by a combination of circumstances." One of which, Lee stated, was that 'it was commenced in the absence or correct intelligence."  Additionally, Sears notes that Meade, if asked, may have stated that "the battle was won because of the timeliness and accuracy of intelligence."

Ryan offers a nearly hour-by-hour and day-by-day focus on both the Federal and Confederate generals'  efforts to find and describe the movements of the opposing army. Joseph Hooker may be remembered for four positive changes he made to the Army of the Potomac during the spring 1863. He reorganized and centralized the cavalry corps; he added corps badges to the army's units; he vastly improved the system of furloughs; he created the Bureau of Military Intelligence. This unit had its own scouts and interrogated prisoners captured by both infantry and cavalry units. Contrabands and local citizens were systematically questioned. Analytical reports were prepared and placed on the desks of both Hooker and Meade. The Federal Signal Corps 'wigwag' stations reported to Federal headquarters and managed telegraphic communications

Conversely, there was not systematic effort by the Confederate commanders to gather, analyze and place military intelligence in front of the headquarters staff.  Longstreet had his own spies, as did Lee.  Ewell and Hill relied closely upon local residents who were sympathetic to the Confederacy and depended upon maps located in Maryland and Pennsylvania county court houses. Jed Hotchkiss, Thomas Jackson's cartographer was inherited by Ewell but also worked for Lee, during the fall of 1862 and the winter of 1863. Lee was his own intelligence analyst. The Confederate Signal Corps was limited to intra-corps communications and Lee, believing that telegraphic communication was not secure, relied upon couriers.

Ryan's work should not be the first book one reads on the Gettysburg Campaign.  Though the style is accessible to most, readers should have a good background in the strategic and tactical workings of the campaign.   Within each chapter, Ryan divides the text between five and ten brief segments. Frequently these segments introduce elements of intelligence gathering and analysis with which he has practiced in his professional career with the U.S. Army and the U.S. Department of Defense.

Some readers may wish for Ryan to have paid a closer attention to Meade's orders after the Grand Assault of July 3. Neither Farnesworth's unsuccessful cavalry charge nor the successful assault of the Pennsylvania Reserves' on Longstreet's lines are addressed. One of the many strengths of Ryan'swork is that he follows the path of the intelligence through the hands of initial collectors, then Hooker, then Halleck, then Stanton, and then Lincoln.  Often, Hooker tells Stanton intelligence that he does not send to Halleck, his immediate commander. As usual, politics permeates the leadership of the Army of the Potomac. The final chapter offers a nice 12 page appraisal of 'The Intelligence Battle.'

Without a doubt,  Thomas J. Ryan's Spies, Scouts, and Secrets in the Gettysburg Campaign: How the Critical Role of Intelligence Impacted  the Outcome of Lee's Invasion of the North, June-July, 1863 most likely will be considered one of the best Civil War books published in 2015, will be nominated for several annual book awards, and be a winner.

Thank you for the review on "Spies, Scouts, and Secrets in the Gettysburg Campaign" by Tom Ryan. We appreciate the review, and are glad you enjoyed the book. Those interested in checking out this book can read more at the Savas Beatie website here: http://tinyurl.com/k5ycbns