New and Noteworthy---Empty Sleeves: Amputation In The Civil War South 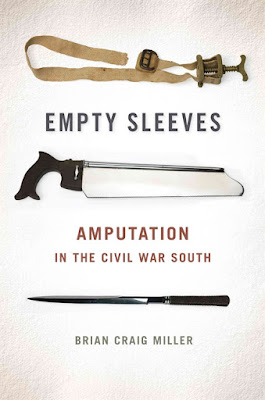 From The Publisher:    The Civil War acted like a battering ram on human beings, shattering both flesh and psyche of thousands of soldiers. Despite popular perception that doctors recklessly erred on the side of amputation, surgeons labored mightily to adjust to the medical quagmire of war.

Brian Craig Miller shows in Empty Sleeves, the hospital emerged as the first arena where southerners faced the stark reality of what amputation would mean for men and women and their respective positions in southern society after the war. Thus, southern women, through nursing and benevolent care, prepared men for the challenges of returning home defeated and disabled.

Still, amputation was a stark fact for many soldiers. On their return, southern amputees remained dependent on their spouses, peers, and dilapidated state governments to reconstruct their shattered manhood and meet the challenges brought on by their newfound disabilities. It was in this context that Confederate patients based their medical care decisions on how comrades, families, and society would view the empty sleeve.

In this highly original and deeply researched work, Miller explores the ramifications of amputation on the Confederacy both during and after the Civil War and sheds light on how dependency and disability reshaped southern society.  Empty Sleeves: Amputation In The Civil War South reveals how amputation influenced definitions of manhood, allowing dependency to be recognized as part of southern masculinity

Brian Craig Miller is an Associate Professor and Associate Chair of History at Emporia State University and the forthcoming editor of the journal Civil War History. Miller is the author of  John Bell Hood and the Fight for Civil War Memory (Univ. of TN Press, 2010) and A Punishment on the Nation: An Iowa Soldier Endures the Civil War (Kent State, 2012). He is currently working on an exploration of Walt Disney and Civil War Memory. His work has been supported by numerous fellowships, including a Mellon Fellowship from the Huntington Library, two Mellon Fellowships from Virginia Historical Society, a Ballard Breaux Fellowship from the Filson in Louisville, and the Reynolds fellowship from the University of Alabama at Birmingham. Miller is an active member of several historical organizations, including the Southern Historical Association and the Society of Civil War Historians. When he is not writing, Miller enjoys running, as he is attempting to run a half marathon in all 50 states (and DC). He has completed 21 so far, most recently in Whitefish, Montana.
Posted by Rea Andrew Redd at 4:57 PM