New and Noteworthy--Life and Death in Chicago's Camp Douglas 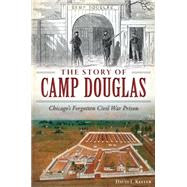 From the Publisher: More Confederate soldiers died in Chicago's Camp Douglas than on any Civil War battlefield. Originally constructed in 1861 to train forty thousand Union soldiers from the northern third of Illinois, it was converted to a prison camp in 1862. Nearly thirty thousand Confederate prisoners were housed there until it was shut down in 1865. Today, the history of the camp ranges from unknown to deeply misunderstood. David Keller offers a modern perspective of Camp Douglas and a key piece of scholarship in reckoning with the legacy of other military prisons.

About the author: David Keller founded the Camp Douglas Restoration Foundation in 2010 and has been involved in the education on and recognition of Camp Douglas for many years.  Retired from the banking industry, he has been a prolific writer and speaker on both the banking industry and his second passion, soccer refereeing.  He is a docent at the Chicago History Museum and a popular speaker on Camp Douglas and the Civil War. The Camp Douglas Restoration Foundation has conducted four archaeological excavations on the site of Camp Douglas and has a major objective to develop and operate a museum on the site. He and his wife are long time residents of Chicago.
Posted by Rea Andrew Redd at 5:43 PM