Women, Pianos and The American Civil War With a Video Clip, Some Humor and a Comment

To paraphrase historian David McCullough, the Civil War was fought in 10,000 places, from Valverde, New Mexico, and Tullahoma Tennessee, to St. Alban’s, Vermont, and Fernandina on the Florida coast. The battle locations were many, but the conflict was alive beyond the battlefields, too – including parlors across the nation.  The American Civil War saw an explosion of popularity for battle pieces — compositions that invited those on the home front to imagine the events of the war through music, thanks to the power of sonic imagery. They became a regular component of life at the homefront for many (mainly northern), white women.

In an article for the Summer 2016 volume of 19th Century Music,  Professor Elizabeth Morgan of St. John’s University examines the role these pieces played on the homefront. She traces the genre’s popularity back to 18th-century Czech composer Frantisek Kotzwara’s Battle of Prague.

“Easily the best-known keyboard work in the genre during the late 18th and early 19th centuries, the Battle of Prague would inspire American works on the Revolutionary, Mexican-American, and Civil wars, often serving as a template for these later pieces, which mimicked its motives, form, and narrative trajectory,” she writes. 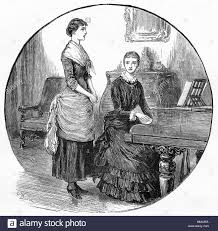 At the height of their popularity, battle pieces and their performance threw into relief several curious relationships and commentaries on gender. Society then, as it still does now, has a tendency to gender instruments.  While 19th-century Americans were theoretically fine with women playing the piano, battle pieces drew more complicated feelings. Morgan cites several satirical references to Kotzwara’s piece in contemporary popular fiction by authors including Edgar Allen Poe and Mark Twain. But mocking Prague wasn’t limited to Americans — Ellen Thorneycroft Fowler’s short story "Wanted, A Wife,"  which includes a protagonist who hates nothing more than a woman at the piano, all because his grandmother played Prague constantly in his youth, and “he had neither forgotten nor forgiven her.”

Why was it such a focus of derision during a time when battle music was one of the most popular genres for American music publishers? Morgan thinks that, for some, it may have lain in a distaste of program music, where sound is used to represent hard concepts.

Then there’s the physical embodiment of the performance. Quoting Twain, Morgan argues that it was the “mimetic relationship between battle music and wartime fighting that lent the genre to satire.” The American satirist wrote of the pianist's body, with all the contortions and movements that come with mapping the violence of war on a battlefield onto the violence of music at the piano.

Third, Morgan writes that there could have been discomfort in the way the genre merged public and private life. Battle pieces were considered compositions for women, and by their very nature required performers to imagine themselves in the grisliest of situations. But for many in the 19th-century, this was incomprehensible. “This identification was not always received warmly,” explains Morgan, “but instead that an audience might laugh at a young female performer, implying that she took herself too seriously.”

Wartime has historically opened employment opportunities to members of society that would have normally been denied them. For example, it was increasingly acceptable for (white) women to be nurses on the front. (The same cannot be said for female doctors). And during the 1860s, there was a surge of women writing music. “Hundreds of female composers published works on topics related to the war,” Morgan writes, and while they weren’t all battle pieces, it was still a significant social shift. “Just as the war made it socially acceptable to be a nurse for soldiers at the front, it also expanded the bounds of propriety to include being a published woman composer.”

Since it’s program music, Morgan argues that women composers brought a different perspective to the table. For example, Laura Hastings Hatch wrote Battle of the Wilderness in 1869, well after the war’s conclusion — which is significant because, at the time, battle pieces were often published shortly after the events depicted. Morgan also points out that while the genre often illustrated clear victories, the Battle of the Wilderness was a violent affair without a clear victor. The sheet music’s cover, too, lacks victorious imagery; it contains instead broken bodies and tools of destruction. There’s no glory in that music, and Morgan theorizes gender may have had a hand in shaping that perspective.

It is difficult to imagine that anyone felt the casualties of the bloodiest war in American history more acutely than women at home, she argues, ”many of whom waited for soldiers who didn’t return or who came home permanently altered.” That it proves hard to find a recording of Wilderness, a battle piece that stands in stark contrast to so many others of its day, is maddening.


“War is hell.” That phrase (supposedly) first uttered by William Tecumseh Sherman tells us that the glories of the battlefield and the romance of war are an illusion, a sham. Trauma and violence don’t just stay on the front lines — it made its way back home too, affecting even the day’s entertainment. White women, through music, found themselves tethered to the theaters of war, with some taking advantage of the creative opportunities that arose during the chaos. If anything, these piano “battles” teach us that, whether home or away, it’s nearly impossible to escape the grip of a Republic of Suffering.

Text Source: WQXR
Posted by Rea Andrew Redd at 9:45 AM