News: Thaddeus Stevens Moves Back To Gettysburg, Sometime in the Future, Maybe 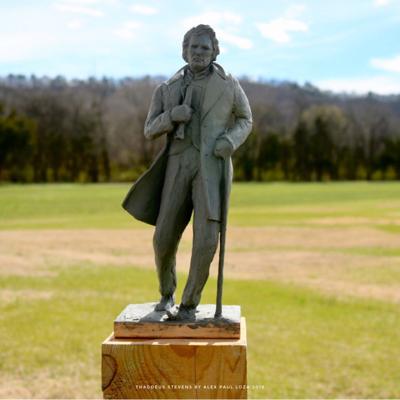 Before the Civil War, before he became Lancaster’s powerful Radical Republican congressman and before he championed the civil-rights-based Reconstruction amendments to the U.S. Constitution, Thaddeus Stevens lived, practiced law and helped a college get started in Gettysburg.  For years, Ross Hetrick, president of the Gettysburg-based Thaddeus Stevens Society, has wanted to see a statue of Stevens erected in the town where the Great Commoner, as Stevens was known, lived from 1816 to 1842.“I’d like anything named after him in Gettysburg,” Hetrick says with a laugh, “or everything named after him. This place should be called Stevensburg instead of Gettysburg.”  Hetrick hopes to get his wish sometime in the next couple of years, having raised $55,000 in cash and monetary pledges and commissioned a 6-foot bronze statue of Stevens to be placed in an as-yet-undetermined spot in Gettysburg.

Hetrick still must figure out a place for the statue to rise in Gettysburg, and must get permission to erect it on a pedestal somewhere in the borough.And he must collect the monetary pledges people have made to the project.“We hope (the statue) will be completed in late 2021 or early 2022,” Hetrick says. “We’re hoping to dedicate it in April 2022, which is Thaddeus Stevens’ 230th birthday.”

In Chattanooga, Tennessee, Hetrick found the artist, Alex Paul Loza, who will sculpt Stevens’ bronze image over the next couple of years.  “What we did was we posted a request for proposals on a website called Public Artist, and we got 20 responses” from artists across the country, Hetrick says.
Those 20 artists wrote statements that described their thoughts on Stevens and on how they sought to recreate him in metal. “And the responses were submitted to a three-person committee that we formed, consisting of two historians and one artist,” Hetrick says, “and they made the selection from those 20 submissions. Mr. Loza’s was the best one.”

Loza says when he read about the statue project, “I felt very connected to (Stevens), and I asked myself, why don’t I know more about him? “Reading about him having a club foot,” Loza says, “I felt that’s where his strength came from. I put that club foot up front, as well as the cane, because I feel (Stevens) was always moving forward. And then his shoulders are leaning forward to strengthen that idea.”

Throughout Stevens’ young life in Vermont, he was mocked for his club foot and the limp for which he used a cane. But many have suggested it made Stevens empathetic to the downtrodden, which, in turn, made him a champion for the civil rights of African Americans and other disenfranchised minority groups.  Loza sculpted a maquette, or miniature clay model, of how he intends the statue to look.

The model shows Stevens taking a step forward, his open coat seemingly flowing out behind him.
Hetrick says the committee liked the sense of “dynamism” and movement Loza was able to capture in Stevens’ stance.  Stevens seemed “like he was never standing still,” Loza says. “He needed to work” and continue moving forward in his fight for social justice, he adds.
The artist, who is a painter as well as a sculptor, says he appreciates Stevens’ ability to “speak for those who had no voice.”

Loza says he needs to adjust his initial image of Stevens to shift the cane from Stevens’ left hand to his right, and must do some anatomical studies to make sure the statue’s weight is properly distributed to reflect that change.The artist, a native of Peru who has lived in the United States since 1989, plans to travel to south-central Pennsylvania next month to tour the sites where Stevens lived and worked.

There’s a Stevens statue at the Thaddeus Stevens College of Technology in Lancaster, a school which money from Stevens’ will helped found. Stevens is buried beneath an inscribed tomb in Lancaster’s Shreiner-Concord Cemetery, and the home and law offices he shared with Lancaster businesswoman Lydia Hamilton Smith and her children is being developed by LancasterHistory as a historic downtown Lancaster site.