New and Noteworthy: A People at War 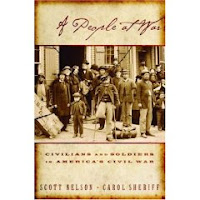 Claiming more than 600,000 lives, the American Civil War had a devastating impact on countless numbers of common soldiers and civilians, even as it brought freedom to millions. This book shows how average Americans coped with despair as well as hope during this vast upheaval.

A People at War brings to life the full humanity of the war's participants, from women behind their plows to their husbands in army camps; from refugees from slavery to their former masters; from Mayflower descendants to freshly recruited Irish sailors. We discover how people confronted their own feelings about the war itself, and how they coped with emotional challenges (uncertainty, exhaustion, fear, guilt, betrayal, grief) as well as physical ones (displacement, poverty, illness, disfigurement). The book explores the violence beyond the battlefield, illuminating the sharp-edged conflicts of neighbor against neighbor, whether in guerilla warfare or urban riots.

The authors travel as far west as China and as far east as Europe, taking us inside soldiers' tents, prisoner-of-war camps, plantations, tenements, churches, Indian reservations, and even the cargo holds of ships. They stress the war years, but also cast an eye at the tumultuous decades that preceded and followed the battlefield confrontations. An engrossing account of ordinary people caught up in life-shattering circumstances, A People at War captures how the Civil War rocked the lives of rich and poor, black and white, parents and children--and how all these Americans pushed generals and presidents to make the conflict a people's war.