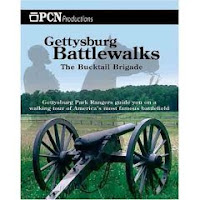 Army of the Potomac, First Corps, Third Division, Second Brigade, in which 2 of every 3 soldiers are killed or wounded during the battle of Gettysburg. The Bucktail Brigade.

Like other brigades of the First Corps on July 1st, it was assigned an area too large for 1300 soldiers to cover. Assailed on both flanks by Rebel soldiers from two different divisions, this brigade of Pennsylvanians retreated to Cemetery Ridge.

John Heiser, GNMP ranger who manages the park's library and crafts maps for Gettysburg Magazine, gives an enthusiastic tour over the McPherson Farm in the steps of the Pennsylvanians. Capturing and having their own flags captured, repulsing Daniels' CSA brigade and then being routed on two flanks, gaining a Medal of Honor and making the McPherson barn their hospital, the story of the Bucktail Brigade at Gettysburg is one of victory and defeat.

Though only about 90 minutes, this PCN tour is one of the more enjoyable. Heiser's perseverance during the July morning heat, the stories of Yankee tactics and valor are well told, and walking among the Bucktail Brigades three monuments along Chambersburg Pike, give a strong sense of place. The viewer would be well served to have a copy of the McElfresh July 1 map that shows crops, buildings, fences and woodlots while viewing the dvd. This PCN tour is recommended for both the new and more experienced Gettysburg visitors and readers.
Posted by Rea Andrew Redd at 11:26 PM