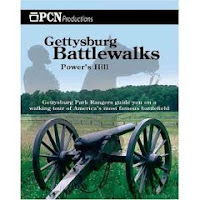 It was between 1867 and 1870, in Drayer's account of the battle, when the term 'fish hook' was first used in print to describe the Federal battleline at Gettysburg. Troy Harman, NPS ranger, understands that this term oversimplies the facts. He states that Gibbon and Haskell described the battleline as a 'U'. If it is a fish hook then the barb is the Power's-Wolf's-McAllister's Hills. Also in the vicinity is the McAllister family's mills, mill race, and the mill pond which as an impediment to a CSA advance, could not be improved upon by the Federals.

Furthermore, Harmon states that the Round Tops were not a major objective in the CSA battlefield strategy. He quotes Longstreet as stating that the point of reinforcement was Culp's Hill. The reinforcments sent July 2nd and 3rd battles for the hill speak to Harmon's point. Harmon further enhances his argument by stating that the only Federal corps to take the offensive was the Sixth and the point of attack was Culp's Hill on July 3rd which was initiated from the Power's Hill area. He does allow for the late afternoon of Fifth and Sixth Corps troops advance into Houck's Ridge/Wheatfield as an advance, but one smaller than the effort to retake the lower Culp's Hill on the morning of July 3rd. This advance was also generated from the Power's Hill area

Harmon entitles this particular tour as 'Power's Hill: The Grand Central Station.'
Power's Hill--the Granite School House Road area's story is one of logistics. The Federal attack on Culp's Hill and the support of the Federal center during the Pickett-Pettigrew-Trimble Charge orginated in this area. Both the ammunition park and the ambulance park for the battle was along the intersection of the Baltimore Pike and the Granite School House road at Power's Hill. He uses Edwin Forbes eyewitness illustration to reinforce this point.

Power's Hill was the first stop George Meade made when he came to the battlefield and it held the potential of the last line of defense if East Cemetery and Culp's Hill fell to the relentless CSA onslaughts. During the battle, Power's Hill was the site of Sixth Corps's headquarters and three batteries, Rigby's Maryland battery, Knapp's Pennsylvania battery and Atwell's Maine battery. At the time, unlike today, the hill was cleared of trees.

This hill also offered fields of fire for Union artillery directed at the Confederate far left flank at Pardee's Field. Harmon estimates that approximately 200 to 400 Rebel sharpshooters were ordered to Wolf's Hill and ordered to scout the Yankee far right flank. These sharpshooters were hindered by the mills' dam, pond, resevoir, and mill race. McAllister's saw and grist mills, before the battle, was a station on the Underground Railroad. Also, in close proximity to the mills' ruins today is Neill (Lost) Avenue, which is a Licensed Battlefield Guide exam test quesiton. Farmsteads that covered Power's, McAllister's and Wolfe's Hill served as hospitals for generals Barlow, and Armistead.

Harmon's tour, as recorded by the Pennsylvania Cable Network, may be frustrating to the viewer who does not a detailed map of the battlefield while watching. At the time the tour was recorded, Power's Hill is overgrown with trees, a portion of the orginal Granite School House Road is cabled off, the McAllister Mill portion is approachable by foot, and Wolfe's Hill is not owned by the NPS. The tour is an excellent for those quite familar with battle but for those who are making a first or second visit to the battlefield or reading their first or second book on the three days\, they may be a little lost among the trees. Also, an order of battle is probably a requirement for most viewers.
Posted by Rea Andrew Redd at 9:45 PM