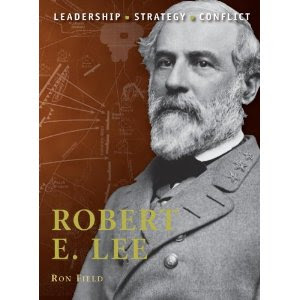 Robert E. Lee: The Background, Strategies, Tactics And Battlefield Experiences Of The Greatest Commanders Of History Series, Ron Field and Adam Hook [illustrator], Osprey Publishing, bibliography, index, paperback, $18.95
Ron Field's brief introduction to Robert E. Lee will satisfy most newcomers to the topic. Well illustrated with fine maps, the book adequately covers the major aspects of the Virginian's upbringing, growth and military careers in the U.S. and Confederate armies. Field does not overlook Lee's failure during 1861 in western Virginia. The five maps cover the campaigns in Virginia and the battles of 2nd Manassas, Fredericksburg, Chancelorsville and Gettysburg but maps are lacking for the Seven Days battles, Antietam, the Overland Campaign, the Petersburg Siege and the retreate to Appomattox. The discussion of Lee biographies places the Lost Cause biograhies in context but Alan Nolan's valuable criticisms go unmentioned. Lee's masterful retreat from Gettysburg is not described. For the audience that is looking for an introduction to Lee, Osprey Publishing should have increased the 64 pages to 96.
Posted by Rea Andrew Redd at 10:42 PM