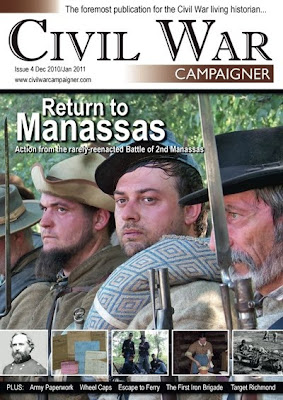 Just in time for Thanksgiving! One of the hightlights of 2010 is the arrival of Civil War Campaigner magazine. Much like Civil War Historian, which is no longer published, CWC focuses on textiles, camplife and campcraft, campaign style reenactments and preservation news.

Issue four examines Federal issue blankets immediate before and during the war, an infantry company's paperwork, civilian wheelcaps and bonnets construction, the Army of the Potomac's Iron Brigade, the work of the Civil War Preservation Trust, and a the efforts of various coalitions in the past and present to save the battlefields around Richmond, Virginia.

The magazine is highly illustrated with photographs and the design is well managed. Without care, it could easily fall into a 'scrapbook' or 'fanzine' category. But with clear and concise writing, campaign-centered topics, CWC is many steps above publications that are generated with the main idea of 'let's make money off of reenactors.'

CWC is delivered by email but not as an attachment. The magazine is electronically hosted by Exact Editions. The software is easy to handle and the contents of the magazine may be read online or printed in part or the entire 90+ pages. With a subscriptions being offered for under $20 this five times a year publication is reasonably priced.
Posted by Rea Andrew Redd at 1:18 PM