New and Noteworthy--- 19 Critical Decisions That Defined The Gettysburg Campaign 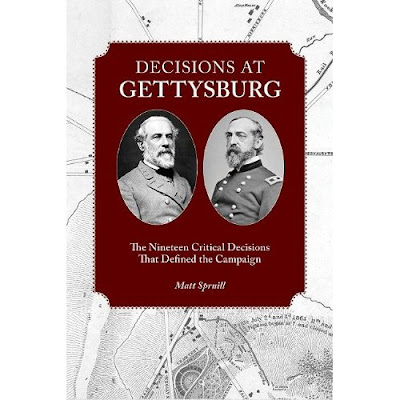 Matt Spruill has the credentials weigh in on the command and control issues of the Gettysburg Campaign. He has been a student of Jay Luvass and Harold Nelson at the U.S. Army War College at Carlisle and then faculty member there. He was for a time a Gettysburg Licensed Battlefield Guide. The 19 critical decisions were chosen based on his military background, his close reading of the primary sources as a participant and instructor of the U.S. Army's staff tours of the battlefield, and his association with the battlefield's licensed guides. His "criterion for a critical decision is that, after the decision was made, it shaped not only the events
immediately following it but also the conduct of the campaign or the battle from that point on." [xii]

The strenghts of Spruill's work is the arguments for each decision are incisive, convincing, and clear. The reader should come to Spruill's work with a basic background knowledge of the battle. Decisions at Gettysburg is not overview of the battle. There is no day-by-day or hour-by-hour account of the fighting. Readers need to have at least one guided tour of the entire battlefield or have read Trudeau's or Sears comprehensive works on the battle. General readers who have delved into Coddington's and Pfanz's books are prepared to read Decisions at Gettysburg.

For each decision, Spruill describes the options available to the commander and of the decision then taken. Then he covers the impact of the decision on the succeeding events and on the the campaign. Fortunately Spruill does not judge decisions as being right or wrong. He is more concerned with how the decision set conditions for a response or another decision. Spruill is color blind in regard to the uniform the decision maker wears. There is no anti-Ewell, anti-Sickles, or pro-Lee or pro-Meade content in the book.

As with any list, what decisions are left off or unnecessarily included. CWL doesn't see any of Spruill's decisions being left off such a list. Several that should have been included though were Lincoln's decision to replace Hooker with Meade, Lee's decision not to pull Ewell's corps from the east side of Gettysburg on the morning of July 2, Hunt's decision to silence Federal artillery on Cemetery immediately before the Pickett/Pettigrew/Trimble assault on July 3. Spruill's does give a slight nod to McGilvery's construction of a line of artillery east of the Trostle Farmstead during the late afternoon of July 2. Those would be on CWL's list of critical decisions that defined the Gettysburg Campaign.

As an appendix, Spruill does supply a 40 page battlefield touring guide to the 19 decisions. In CWL's copy, there is now no page that does not have underlining, notes, questions and exclamation marks on it. Most likely, Spruill's Decisions at Gettysburg will be seen in December and January on many best of 2011 lists.

July 1
5. Buford chooses to contest the advance of the Army of Northern Virginia
6. Reynolds chooses to reinforce Buford’s cavalry division
7. Ewell with Rodes chooses to attack immediately on arriving near Gettysburg
8. Ewell with Johnson chooses not to attack Culp’s Hill
9. Meade chooses to move forward to Gettysburg

July 2
10. Lee choose to continue the offensive and attack the Federals left
11. Longstreet chooses to counter march to avoid detection by the Federal left
12. Sickles chooses to advance to the Emittsburg Road
13. Longstreet choose advance en echelon northeast
14. Law sends his brigade to capture the artillery on Devil’s Den and Houck’s Ridge
15. Benning sends his brigade towards Devil’s Den and not Little Round Top
16. Geary holds Greene brigade on Culp’s Hill while sending two brigades to the Federal left

July 3
17. Slocum and Williams assault the Confederate left at 4:30a
18. Lee orders Longstreet to coordinate an assault of the Federal center

Labels: Battle of Gettsyburg, Command and Control of Troops