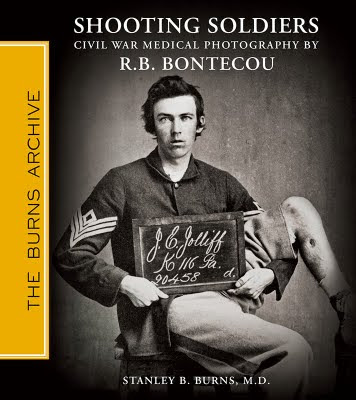 Shooting Soldiers: Civil War Medical Photography by R.B. Bontecou, a revealing exposé of the wartime clinical photographs of Reed Bontecou, is a new significant chapter in Civil War history. The war has been under writers’ and scholars’ microscopes for the past 150 years and there are few significant things yet to be uncovered of general interest. The subject of this book is one of them – clinical photography during the war – and the images are artistically posed in the style of the masters of photography, making them major works of art.

Through his remarkable portraits, Bontecou created and became a legend. This is the first volume of a series showcasing the Civil War carte de visite (CdV) photographs of Reed Brockway Bontecou, MD, Surgeon-in-Charge of Harewood U.S. Army General Hospital, Washington DC. He was responsible for pioneering and taking the largest number of photographs of wounded soldiers during the war and was the largest contributor of photographs and specimens to the Army Medical Museum and Civil War medical publications. His close up images of surgery, anesthesia, and patients posing with their pathological specimens were unique for his time. Many photographs are of patients pre- and postoperation, views of patients showing the progression of specific treatments, or the various stages of diseases. 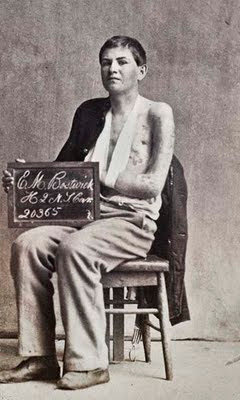 The album is also the pioneering effort by one physician to document war wounds and to use photography to teach physicians how to care for these wounds. None of the clinical images were published as photographs, most of these images are now reproduced photographically in this series for the first time. Bontecou’s photographs are beautiful, artistic representations of photographic art that transcend the subject. This book will become a classic and has been heralded by the Civil War medical historians who have seen the images and text as it was produced. Michael Rhode, Chief Archivist of the Otis Historical Archive, National Museum of Health and Medicine wrote the forward. He notes “that the presentation of these images is a great service as even I have not seen most of them.”

To place the photographs in context of their creation, a history of Bontecou’s career is presented along with a history of the various images and albums he made. A summary of the last campaigns of the war are also briefly documented. A list of units represented is documented along with a list of the battles and the specific soldiers wounded in them. About 103 plates of soldiers from the CdV album posing with identification boards are included, and arranged by states but not numerically by unit number. Also discussed are the artistic and scientific merit of the images. A presentation of the role of sacrifice and death during the Civil War era is important in helping understand the general mental state of servicemen of that era. This chapter documents some death and dying concepts in the time period and emphasizes the lack of concern of Federal government authorities for identification and proper burial of servicemen.

In addition to being an internationally distinguished author, curator, historian, collector, publisher, and archivist, Dr. Stanley B. Burns, MD, FACS, is a New York City ophthalmologist and Clinical Professor of Medicine and Psychiatry at NYU Langone Medical Center. In 1975 he began collecting historic photography. In 1977 he founded The Burns Archive to share his discoveries and began his writing and publishing career. Dr. Burns’ collection of vintage photographs (1840-1950) has been generally recognized as the most important private comprehensive collection of early photography. It has been showcased in numerous national media venues worldwide. Artists, researchers and historians can access the one million+ photographs. The images have been the source of numerous Hollywood feature films, documentaries and museum exhibitions. Dr. Burns has authored forty photo-historical texts and curated more than fifty photographic exhibitions. He has been a founding donor of photography collections, including the J.P. Getty Museum and The Bronx Museum of the Arts. He spends his time lecturing, creating exhibits, and writing books on underappreciated areas of history and photography.

Those medical photographs really are an amazing resource. Many of them are public domain available online thanks to the folks at the National Museum of Health & Medicine:
http://www.flickr.com/photos/medicalmuseum/sets/72157614294677868/

I've been writing brief profiles of some of the men in these photos and posting them on my blog:
http://vanishedhand.blogspot.com/

Hope I'm not just doing something that Burns has already done in his book. Anyway, thanks for sharing.