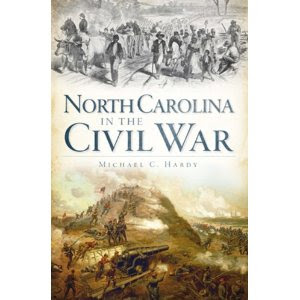 Publisher's Description: First at Bethel, farthest at Gettysburg and Chickamauga and last at Appomattox" is a phrase that is often used to encapsulate the role of North Carolina's Confederate soldiers. But the state's involvement stretched far beyond these few battles. The state was one of the last to leave the Union but contributed more men and sustained more losses than any other Southern state.

Tar Heels witnessed the pitched battles of New Bern, Averasboro and Bentonville, as well as incursions like Sherman's March and Stoneman's Raid. Join Civil War scholar Michael C. Hardy as he delves into the story of North Carolinians the Civil War, from civilians to soldiers, as these valorous Tar Heels proved they were a force to be reckoned with.

Award-winning author and historian Michael C. Hardy has penned numerous books, articles and blog posts on North Carolina and the Civil War. In 2010, he was honored as the Historian of the Year by the North Carolina Society of Historians. He lives with his family in western North Carolina, near the famous Grandfather Mountain.

CWL: History Press' reputation for finding the best talent for their Civil War Sesquicentennial Series continues. Michael C. Hardy has written 6 other North Carolina's Civil War books and three others on North Carolina history. CWL recently featured the History Press' Battle of South Mountain by John Hoptak and is now reading The Battle of Fort Donelson by James R. Knight. Both are clear, concise, and thorough.
Posted by Rea Andrew Redd at 10:23 AM

What a fine site devoted to Civil War books and related matters! Thank you for all your hard work. It's most beneficial to other scholars and people like me who want to know about good Civil War books.