New and Noteworthy---Death and the Civil War During the Sesquicentennial 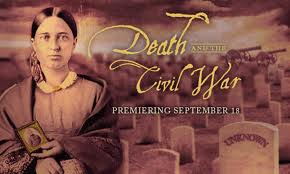 At 120 minutes, Burns' pace is deliberate and provocative. The opening segment is jarring.  A few moments before his death, a Mississippi soldier begins writing a letter to his father. The man bleeds onto the paper has he haltingly reveals his last thoughts about his life, service, death and afterlife. Within this 12 minute  preface  viewers' hearts may begin to break.  The images that Burns selects include photography from the era; within the images there are ghosts, individuals who moved during the 30 second to a minute and half exposure time. There are subtleties in the images and texts that may move past the causal viewer; such may be the estimate that of the 750,000+ deaths 50% were not identified by name. 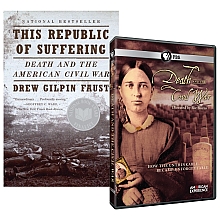 The chapters are each about 15 minutes in length: Death, Burying, Naming, Honoring, Believing and Doubting, Accounting, and Remembering. Drew Gilpin Faust is the most frequently interviewed expert during the film; generally her remarks impart important facts but on one occasion it appears that she minimizes the 6,500+ deaths during the Enduring Freedom and Iraqi Freedom campaigns. The individual being interviewed who is most likely to be remembered is Thomas Lynch, undertaker and poet. He remarks defines and gently elevates the bleak discussions that, at times, may approach melodrama. The narration by  Oliver Platt and music compositions by Brian Keane are effective in conveying grief and hope. Is there an 'Ashoken Farewell'  on the soundtrack.  Yes, possibly two: A Thousand Thoughts [Tusen Tankar] and Republic of Suffering in acoustic and orchestral versions. Both the film and the soundtrack are immediately available after the Tuesday evening broadcast and they are worth every penny and much more.  Ric Burns' Death And The Civil War is an exceptionally fine work in the field of television broadcasting and presentation of historic artifacts, photographs and sentiments.