New and Noteworthy---Fury At the July 2 Apex of Gettysburg: The Bliss Farm 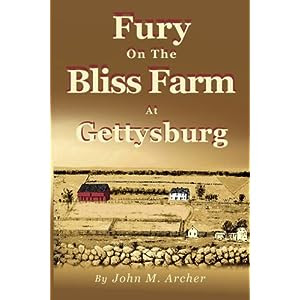 Many debates have occurred regarding whether Gettysburg was a turning point of the Civil War. Other debates have risen with the question: What was the turning point of the Battle of Gettysburg. If July 2 is the bloodiest day of the battle and if Longstreet's assault was a main feature of that day, then what event marked the end of the assault? The assault ended or failed on the Bliss Farm, located on the west side of the Emmitsburg Road and opposite the Abraham Bryan farm.  John M. Archer, a licensed Gettysburg battlefield guide,  has written on the Bliss Farm in America's Civil War magazine and has been filmed, by the Pennsylvania Cable Network, guiding a tour of the location.  With Fury On The Bliss Farm At Gettysburg, he offers a clear and concise booklet of one his popular tours.

In 1857 William Bliss and his family moved from western New York to Adams County, Pennsylvania and purchased a 44 acre farm with its double log and frame house, a large banked barn, two water wells that featured pumps, and a large fruit orchard that held principally cherries and peaches. On July 2 his farm was fought over and on July 3 it the buildings were burned. Archer describes the multiple infantry charges with the capture and recapture of the farm buildings several times. During the July 3 Grand Assault, Confederates' left flank maneuvered around the smoking and smoldered embers of the buildings.

Archer's six stop tour begins on the east side of Emmitsburg Road at Ziegler's Grove, moves to the Brian Farm and then the 14th Connecticut monument. Stops 4, 5, and 6 are on the west side of Emmitsburg Road. The Confederates' important occupation of Long Lane, the multiple attempts to take and hold the farm buildings, and the role of the Bliss Farm in Wright's occupation of Cemetery Ridge are thoroughly explained. In three appendices, Archer describes the nature of skirmishing and Wright's breakthrough; also armies' the order of battle is offered. Fury On The Bliss Farm At Gettysburg is useful for the armchair reader and the battlefield visitor who desires an informed walk describing what might be the apex of Longstreet's July 2 assault.
Posted by Rea Andrew Redd at 10:49 AM