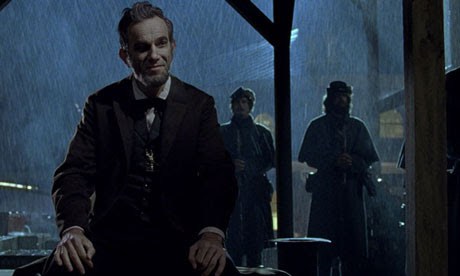 Politics was a dirty business even in the 19th century, and even when changing history for the better, as the best moments of  Lincoln  wittily and elegantly prove. Steven Spielberg's  behemoth of a new film, which premiered in unfinished form at the New York film festival Monday night, has a title that suggests a sweeping portrait of the great 16th American president. But the film is largely too content depicting Abraham Lincoln as an all-knowing icon, and even with Daniel Day-Lewis's beautifully measured (and surprisingly soft-spoken) performance, Lincoln often recedes to the background of the very uneven movie that bears his name.
The screenplay from Pulitzer prize-winner Tony Kushner focuses on just the last four months of Lincoln's life, as he works in Washington to end the civil war raging just south of him, but not before passing an amendment to officially outlaw slavery. The backroom deals and legal hurdles to make that happen are immensely complicated, but after some bulky exposition this wheeling and dealing among lawmakers makes for the film's strongest scenes. Secretary of State William Seward (David Strathairn) hires a trio of hooligans (John Hawkes, Tim Blake Nelson and James Spader) to rustle up votes for the amendment through whatever means necessary, while on the floor of the House of Representatives, anti-slavery lawmaker Thaddeus Stevens  (a gloriously scene-stealing tommy Lee Jones) bellows at pro-slavery Fernando Wood (Lee Pace), with the roomful of men around them banging on their desks and shouting over each other. If only modern American politics were remotely as entertaining.

We visit the battlefield a few times, with General Ulysses S Grant (Jared Harris) preparing to negotiate peace with the Confederacy, but Lincoln is largely set in the cramped chambers of the White House and Congress; between that and the many speeches about constitutional law, it can start to feel a little airless. Glimpses into Lincoln's personal life, including strained relationships with both his wife (Sally Field) and eldest son (Joseph Gordon-Levitt), are intended to add a human dimension to the president, but they're never as effective as simply seeing the man at work; Gordon-Levitt has had a fantastic year in other films, but his character here is entirely superfluous, and Field brings tremendous overacting to a cast that's otherwise quite restrained.

Lincoln isn't as sentimental as you might expect from Spielberg, and though it never digs deep enough into Lincoln as a man, it's unafraid to show him as a canny politician willing to bend the law and make enormous compromises to accomplish a greater goal. With John Williams's gentle score, posh cinematography from Janusz Kaminski and a whole load of big costumes and facial hair for the cast, Lincoln veers too often toward becoming a somnolent period piece, but the strong cast and political texture always manage to perk things back up. Though it might have worked better as a tighter, purely political thriller with even less focus on the title character, Lincoln's smarty-pants pleasures manage to outweigh its stuffy drawbacks.

Text and Image Source:  The Gaurdian 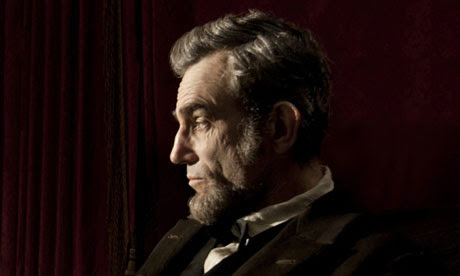 I have seen the new movie "Lincoln" in a preview in NYC and it was fantastic!!! Daniel Day Lewis was "right on" as Lincoln and the story line was terrific!!