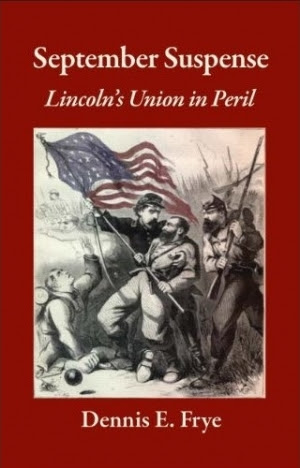 Newspapers of the Civil War era are a fountain of information on the material aspects of life and political disputes. During the era there was no unbiased reporting of political news; there was lots of speculation. "Newspapers bring us closer to people and allow us to be there when they make their history" remarks Dennis Frye in his introduction to September Suspense: Lincoln's Union in Peril. During the first week of September of 1862 no one knew the outcome of the Confederate invasion of Maryland and Pennsylvania, the fall elections, and the revelation of an emancipation proclamation.

Frye relies heavily on southern and northern newspapers and diaries but not those written after the autumn of 1862.  Such reliance provides an immediacy which is usually not offered in most Civil War books.  Over 35 newspapers were consulted. Frye's narrative is sharp and concise. His pacing of the chapters creates an undercurrent of a  'you are there' suspense. This is reminiscent of of John Michael Priest's use of only diaries and letters of privates, corporals, sergeants, captains and lieutenants in Antietam: A Soldier's Battle and Before Antietam: The Battle of South Mountain.

In September Suspense: Lincoln's Union in Peril readers wrestle with American abolitionists and slaveholders, British politicians and American bankers, retail merchants and marauding soldiers, presidents and their cabinets, war governors and army generals, men and women on the street and soldiers in the ranks.  There is a suspense in Frye's work that moves readers forward through these American lives.

The appendices are not 'toss in the kitchen sink' material. The first appendix is the Confederate Terms of Peace published on September 11, 1862 in the Philadelphia Inquirer which was copied from and editorial appearing in the Richmond Enquirer and a Philadelphia Inquirer editorial response to it. The second appendix is General Lee's Proclamation to the People of Maryland that was made September 8, 1862 and a third appendix discusses the dilemma of attempting to ascertain how many Confederate troops crossed into Maryland the first days of September. Each is an essential document that readers in September 1862 held in their hands and read.  In September Suspense: Lincoln's Union in Peril  Frye achieves his goal of having the reader 'feel history', enter 'a time machine' and 'live the moment' with those who passed passed, day by day, through a suspenseful month when the Union was in peril.