CWL--Contested Historical Landscape: Gallagher on The Civil War in Contemporary Films and Art 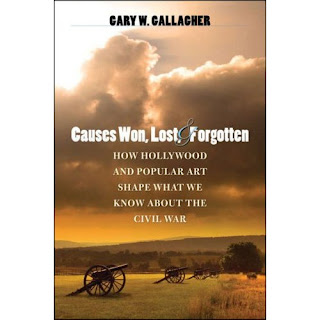 "Introduction" in Causes Won, Lost and Forgotten: How Hollywood and Popular Art Shape What We Know About the Civil War, Gary Gallagher, University of North Carolina Press, 2008, pp. 1-16.

Interpretative traditions created by the war's participants have appeared in popular culture since the 1960 Civil War centennial. The Lost Cause Tradition describes the Civil War as a nation-building experiment by the South as a patriotic and admirable struggle against a monolithic North and not as a slave-holders' rebellion. The importance of slavery in the secession movement is minimized and the importance of the original intent of the Constitution is elevated.

The Union Cause Tradition frames the war as an effort to maintain a democratic republic in the face of the slaveholders' treason that threatened the Founders' republic and the future of democracy in a world that was still ruled by kings and queens. The Emancipation Cause Tradition views the war as primarily as struggle to liberate 4 million slaves/unpaid workers and remove the negative influences of those invested in slavery, such as the slaveholders and to a degree 'doughface' Northern Democrats.

The Reconciliation Cause Tradition, best represented by the 1993 film 'Gettysburg', extols American virtues that both sides held and manifested during the war. This view exalts the restored nation and dismisses the role of African-Americans during and after the war. Elements of these traditions are held in common. The Union and Emancipation Traditions despise the Confederacy. The Reconciliation and Lost Cause Traditions believe the Confederacy was a valid expression of American democratic republicanism.

Gallagher's book focuses upon the expressions of these four traditions since 1985. He views the post-Centennial era of 1965 to 1985 as lacking in expressions of the Civil War in popular culture. The resurgence of popular expressions of the Civil War stems from several conditions. The chronological distance from the Viet Nam War, the elevation of patriotism during the Reagan presidency, the promotion of the 125th/1988 anniversary of the war, and the surprise of 12,000 reenactors performing for an audience of 140,000 spectators at Gettysburg each advanced Civil War themes into popular culture. Galvanizing incidents include the Disney Corporation's commercial assault on the Manassas National Military Park and the commercial success of James M. McPherson's Battle Cry of Freedom; both occurred in 1988.

Coverage of these last three events in The New York Times, the Washington Post, and USA Today, as well as U.S. News and World Report, Newsweek, suggested that 1988 was emotionally charged for history buffs. Media programming which both cultivated the existing market and expanded public interest in the American Civil War was the 1990 PBS series The Civil War that was created by Ken Burns. Eleven one-hour segments with 40 million viewers jolted both the imagination and wallets of Civil War buffs and those unaware of the war. The companion book massively promoted; Civil War sites of the National Park Service saw more visitors.

Shelby Foote's The Civil War: A Narrative and Michael Shaara's Killer Angels became a bestsellers though were written during the decades of 195os, 1960s and 1970s. Before Ken Burn's series was aired, Shelby Foote's trilogy sold about 15,000 in 15 years; in six months after the conclusion of Ken Burn's series 100,000 copies of Foote's trilogy was sold. The dormant Confederate battle flag, frequently part of state flags and high school halftime programs, became offensive in the eyes of many in the 1990s. The release in 1989 of the film Glory brought the valor of African-Americans soldiers into popular culture.

In Causes Won, Lost and Forgotten: How Hollywood and Popular Art Shape What We Know About the Civil War, Gallagher examines 14 films which have Civil War themes and were made between 1989 and 2006. " . . . films undeniably teach Americans about the past---to a lamentable degree in the minds of many academic historians," states Gallagher. Additionally, Gallagher reviews 2,750 commercial advertisements from 1962 through 2006 in Civil War themed magazines.

Gallagher found two key themes in commercial films and advertisements. Hollywood is increasingly shunning The Lost Cause Tradition and the Emancipation Tradition is becoming more influential. Conversely, in the Civil War art marketplace The Lost Cause Tradition is predominant. A second key theme is the weak presence of The Union Tradition in movies and art. Disappearance of The Union Cause is indicative of the loss of nationalism as a motivating force in American culture.
Posted by Rea Andrew Redd at 10:05 AM