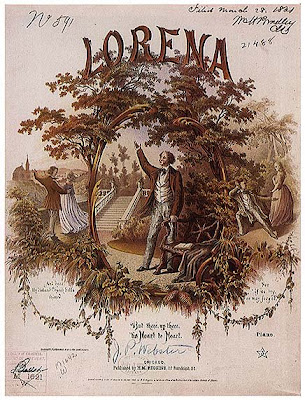 "Lorena" is an antebellum song with Northern origins. Written in 1856 by Rev. Joseph Phillbrick Webster, after a broken engagement to his sweetheart. He wrote a long poem about his fiancée but changed her name to "Lorena," an adaptation of "Lenore" from Edgar Allan Poe's macabre poem, "The Raven." Webster's friend, Joseph Philbrick Webster, wrote the music, and the song was first published in Chicago in 1857. It became a favorite of soldiers of both sides during the American Civil War.

During the American Civil War, soldiers on both sides of the conflict thought of their wives and girlfriends back home when they heard the song "Lorena." One Confederate officer even attributed the South's defeat to the song. He reasoned that upon hearing the mournful ballad the soldiers grew so homesick that they lost their effectiveness as a fighting force.

Lorena was based on the composer's love for a Zanesville, Ohio girl named Ella Blocksom (who later went on to marry William Wartenbee Johnson, Ohio Supreme Court justice from 1879-1886).

Miss Blocksom's parents being deceased, she lived with her sister and brother-in-law, Mr. and Mrs. Henry Blandy. The family attended the Universalist Church in Zanesville where the Rev. Henry DeLafayette Webster was the minister. Miss Blocksom caught the eye of the young preacher and his feelings became more than just pastoral. Henry Blandy and his brother Fred were co-owners of the Blandy foundry in Zanesville. As a wealthy and prominent member of the community he could not see his sister-in-law becoming romantically attached to a poor preacher and so stepped in to put an end to the relationship. Miss Blocksom told Webster that they must part and gave him a letter containing the line "If we try, we may forget," which found its way into the song. The brokenhearted Mr. Webster resigned his pastorate and left Zanesville. In 1856, Webster met Joseph R. Webster, the composer of "In the Sweet By and By." J. R. Webster was looking for lyrics to a song he was writing and Henry Webster responded by writing a ballad about his lost love, changing her name from Ella to Bertha. The composer required a three-syllable name and Henry Webster changed the name again, this time to Lorena. The song was published in 1858 by Higgins Brothers of Chicago and soon the opening words, "The years creep slowly by, Lorena, The snow is on the grass again; The sun's low down the sky, Lorena, The frost gleams where the flowers have been," were known across America.

The years creep slowly by, Lorena,
The snow is on the grass again.
The sun's low down the sky, Lorena,
The frost gleams where the flow'rs have been.
But the heart throbs on as warmly now,
As when the summer days were nigh.
Oh, the sun can never dip so low
A-down affection's cloudless sky.
A hundred months have passed, Lorena,
Since last I held that hand in mine,
And felt the pulse beat fast, Lorena,
Though mine beat faster far than thine.
A hundred months, 'twas flowery May,
When up the hilly slope we climbed,
To watch the dying of the day,
And hear the distant church bells chime.

We loved each other then, Lorena,
More than we ever dared to tell;
And what we might have been, Lorena,
Had but our lovings prospered well --
But then, 'tis past, the years are gone,
I'll not call up their shadowy forms;
I'll say to them, "Lost years, sleep on!
Sleep on! nor heed life's pelting storms."

The story of that past, Lorena,
Alas! I care not to repeat,
The hopes that could not last, Lorena,
They lived, but only lived to cheat.
I would not cause e'en one regret
To rankle in your bosom now;
For "if we try we may forget,"
Were words of thine long years ago.

Yes, these were words of thine, Lorena,
They burn within my memory yet;
They touched some tender chords, Lorena,
Which thrill and tremble with regret.
'Twas not thy woman's heart that spoke;
Thy heart was always true to me:
A duty, stern and pressing, broke
The tie which linked my soul with thee.

It matters little now, Lorena,
The past is in the eternal past;
Our heads will soon lie low, Lorena,
Life's tide is ebbing out so fast.
There is a Future! O, thank God!
Of life this is so small a part!
'Tis dust to dust beneath the sod;
But there, up there, 'tis heart to heart.

Image: http://images.google.com/imgres?imgurl=http://usinfo.state.gov/infousa/life/artsent/music/mu045002.jpg&imgrefurl=http://usinfo.state.gov/infousa/life/artsent/music/musamer.htm&h=571&w=436&sz=103&hl=en&start=11&sig2=K5KqEKtgKW0YeugzC1nDfQ&tbnid=SI3nPfhq1nSArM:&tbnh=134&tbnw=102&ei=ZFdFSPLgE6bwhALDj_THCQ&prev=/images%3Fq%3Dlorena%2Bsong%26gbv%3D2%26hl%3Den
Posted by Rea Andrew Redd at 10:29 AM