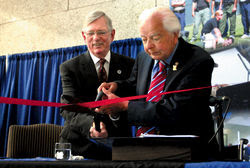 U.S. Sen. Robert C. Byrd has helped funnel more than $122 million into Harpers Ferry’s state-of-the-art training facility for U.S. Customs and Border Protection, and he isn’t finished yet. Byrd visited the site for a special ceremony Friday, where two events were wrapped into one. Byrd and U.S. CBP Commissioner W. Ralph Basham participated in a ribbon-cutting for the center’s new Firing Range Complex, while they helped celebrate groundbreaking for construction of the facility’s Leadership Academy.

“Today, the efforts of hundreds of people are spread before us like a blessing,” Byrd said to the crowd of more than 300 federal leaders and community members who gathered for the afternoon ceremony inside one of the firing ranges. He said he started securing funding for the Advanced Training Facility in 1999, and he is proud that he has obtained nearly $123 million in design and construction dollars for the center’s construction. That funding was supplemented by more than $26 million from Customs and Border Protection.

“That ain’t chicken feed,” Byrd joked, getting one of many rounds of applause. He also received standing ovations when he arrived, when he was introduced and when he finished his 15-minute speech. In addition to discussing the center’s importance to the nation’s security, Byrd also pointed out the significance of the site’s location near Harpers Ferry, where one of only two U.S. Armory and Arsenal facilities was built in 1799. It operated there until 1861, when it was closed to prevent its capture during the Civil War.

“Now, more than 200 years later, a new top-of-the-line firing range complex has emerged in the same geographic vicinity,” he said. “Here, much-needed firearms training will be available for the men and women on the front lines of protecting the borders and economy of this great nation.” The Firing Range Complex covers 65,000 square feet, with five different ranges designed for rifles and handguns. It also includes classrooms, weapon cleaning areas and firing range control rooms.

During the ceremony, Basham praised Byrd’s leadership and vision, and said the Customs and Border Protection’s training center would not have been possible without him. “In this age of global terrorism, it is essential that those sworn to protect the borders of our nation are fully trained and prepared to do so,” Basham said. “We are extremely proud of this first-rate training facility, which would not exist were it not for one single driving force — Sen. Robert C. Byrd.” The firing range center was open for tours following the ceremony, while Byrd met with a long line of well-wishers who wanted to shake his hand and take pictures.

The 124-acre Advanced Training Center sits along School House Ridge off U.S. 340 near Harpers Ferry, and it opened in August 2005. The center features a range of training environments, including facilities such as a land border crossing, airport terminal and marine and urban areas. The center also includes an administration building, welcome center and classrooms. Byrd said the facility is the first in the nation to provide advanced law enforcement training specifically for Customs and Border Protection efforts.

Besides the CBP Leadership Academy, other planned facilities include a warehouse and a dormitory complex. The academy will provide a range of training for officers and agents, and the more than 600 new supervisors who are added to Customs and Border Protection each year. The agency has more than 50,000 federal employees, making it the nation’s largest group of armed federal law enforcement officers. 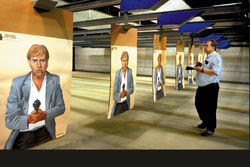 Wes Windle, the acting director of the Advanced Training Center, said he’s been thrilled to watch the center expand with cooperation from Byrd, the CBP, Harpers Ferry National Historical Park and police agencies from throughout the region that also use the facility. “I’m just astounded with what we’ve been able to do,” Windle said after the ceremony . “For me, working in this type of facility is just phenomenal. ... The CBP has a great, great home here.”