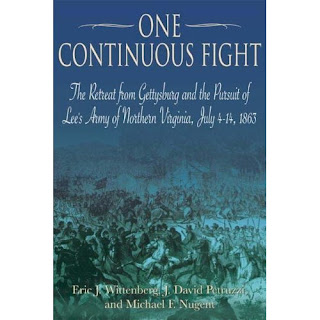 Authors, J.D. Petruzzi and Michael F. Nugent, and Eric Wittenberg have launched the wwwsite for One Continuous Fight: The Retreat from Gettysburg and the Pursuit of Lee's Army of Northern Virginia, July 4-14, 1863. The book is scheduled to be released during the latter part of May. Two noted, and by CWL appreciated, authors are enthusiastic about the trio's accomplishment.

“It is fair to say that [Wittenberg, Petruzzi, and Nugent] have combed the countryside more thoroughly than Albert Jenkins’ cavalry to bring their readers scores of previously unpublished soldier accounts of the retreat and extensive fighting encompassed within it… [This book] is one of the most original, most deeply researched, and one of the most scholarly works to come out on the Civil War in many years.” (from the Foreward, Ted Alexander)

“[The authors] have brought together an impressive array of primary materials, so that much of the action unfolds in the words of those who were there… The authors of this book have taken the time and care to get the story right and the tour directions correct; I encourage you to take full advantage of both.” (from the Preface, Noah Andre Trudeau)

Here's the table of contents of One Continuous Fight:

Chapter 1: A Vast Sea of Misery: The Wagon Train of the Wounded
“As many of our poor wounded as possible must be taken home.” -- Robert E. Lee

Chapter 2: The Retreat of the Main Confederate Army Begins
“Genl Meade never brought his ‘rascally virtue’ of caution to a better market than when he let us alone—for we should probably have given a good account of him.” -- Maj. Campbell Brown, Confederate Gen. Richard Ewell’s staff

Chapter 3: July 4: The Midnight Fight in the Monterey Pass
“It was one of the most exciting engagements we ever had.”
-- Capt. James H. Kidd, Custer’s Michigan Brigade

Chapter 4: Meade’s Pursuit Begins
“I wonder if Napoleon or even Robt. Lee were our commander this evening would they pursue a defeated army in this cautious, courteous way?”-- Federal officer

Chapter 5: The Confederates Garrison Williamsport
“The Rebel army is in a bad state & there is not telling how they are going to get out of it.”-- Col. John B. McIntosh, 2nd Federal Cavalry Division

Chapter 7: July 6: The Battle for Williamsport
“[I] quickly organized a small force of dismounted, sick, and wounded men who were along with the train and who snatched up arms and ammunition as could be found… I managed to inspire the men with confidence and led them in.”-- Lt. Col. William Delony, Cobb’s Legion Cavalry

Chapter 8: July 7: In Full Pursuit
“The boys are confident that we will whip Lee’s Army so that he will not be fit to do anything more for some time to come. We have good news all the while from our pursuing forces.”-- Sgt. Ellis C. Strouss, 57th Pennsylvania Infantry

Chapter 9: July 7: Skirmish at the College of St. James and the First Battle of Funkstown “[T]he road of slumbering wrath was marked here and there by cleft skulls and pierced bodies…” -- Brig. Gen. William E. Jones, Confederate cavalry brigade commander

Chapter 10: July 8: Heavy Fighting at Beaver Creek Bridge and Boonsboro
“They are all bully boys, and they don’t fear the Rebbs a bit… Gen. Buford says…the only fault he finds with us is that he can’t stop us when once we get the Rebbs to running.” -- 8th Illinois cavalryman

Chapter 11: July 9: Sniping Along the Lines
“The game of war went on with determination on one side and desperation on the other.”-- Member of the Federal Iron Brigade

Chapter 13: July 11: The Armies Jockey for Position
“Mr. Yank would have smelt powder & ball before getting us out of the breastworks.” Confederate infantry officer

Chapter 14: July 12: The Second Battle of Hagerstown
“Call no council of war. It is proverbial that councils of war never fight.”
-- General-In-Chief Henry Halleck to George Meade

Chapter 15: July 13: A Frustrating Day Spent Waiting
“We hope Lee can’t get away but his neck is slippery and we can only count on him when we get him.”-- Sgt. Frank Saunders, 6th New York Cavalry

Chapter 17: The Federal Advance and Aftermath
“It is enough to say that although [Lincoln] was not so profoundly distressed as he was when Hooker’s army recrossed the Rappahannock after the battle of Chancellorsville, his grief and anger were something sorrowful to behold.”
-- Noah Brooks, newspaper correspondent and friend of President Lincoln

Conclusion
“Covering the retreat of an army is not a fun thing to do. It was one continuous fight until we reached Hagerstown, Md.; and even after that, for we had skirmishes everyday until Gen. Lee crossed the Potomac.”
-- Pvt. L. T. Dickinson, 2nd Virginia Cavalry

One Continuous Fight includes endnotes, a bibliography, and an index.

Check out the site; the portal page is sharp!

www.gettysburgretreat.com,
Posted by Rea Andrew Redd at 11:09 AM