This year is the 200th anniversary of the birth of Jefferson Davis, who was born in Fairview, Ky., on June 3, 1808, and at the age of 2 moved with his parents to Rosemont Plantation near Woodville, Miss. In 1835, Davis moved to Warren County where he spent the most productive years of his life. This is a series of 11 articles about Davis as a local Citizen.

May 15, 2008 Political career started with a one-day campaign, and a loss at the polls

May 16, 2008 Varina was met on an errand, and courtship followed

May 17, 2008 Washington and war with Mexico kept time at Brierfield brief

May 18, 2008 Brierfield lush and productive in years before the war

May 22, 2008 Last stop at Brierfield complicated by illness

May 23, 2008 Unexpected tributes were also unequivocal 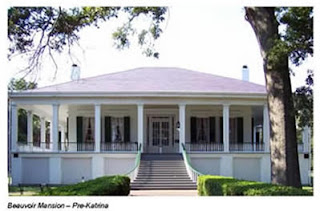 The house is reopening in June. Go to the Beauvoir's wwwsite at
http://www.beauvoir.org/ and read the scanned newspaper story of the rebuilding of the house.
Posted by Rea Andrew Redd at 10:39 PM