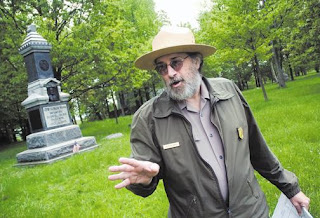 Map in hand, park ranger Karlton Smith lays an index finger on one rectangular shape he trusts to orient visitors with their historic surroundings. "This building's actually McDonald's," he says. "That's a good marker." Seconds later, an outstretched arm points toward the modern-day structure as it stands in real life on Emmitsburg Road - across the street from where Smith stands on Cemetery Ridge, a chunk of land on which hundreds were killed and wounded during the Battle of Gettysburg.

The use of 20th-century developments as reference points is one way Smith said he has been able to help visitors better understand what happened here in 1863. But it's a teaching method that could someday be considered passé. For several years now, the Gettysburg National Military Park has been carrying out plans to "rehabilitate" some of the land within its 6,000-acre boundary. 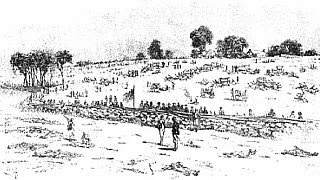 Trees have been removed from places they didn't exist in 1863, when Civil War soldiers fought on open land. Telephone poles and utility lines have been relocated underground so as not to impede on a history student's perspective. The overall goal is to make the battlefield again look as it did in 1863 - or, at least, as close as possible. Next on the project list is 43.5 acres of land where the former Visitor Center and Cyclorama building are located.

Smith stands on a small piece of the entire project area, situated between Taneytown and Emmitsburg roads. It includes Ziegler's Grove, several historic structures and part of Cemetery Ridge. Because of the restaurant's proximity to the battlefield, Smith could actually be using McDonald's as a landmark for many more years. The restaurant is located in the borough of Gettysburg, outside the park's boundary, and not included within the project area. Park officials have said there is no intent to stretch "rehabilitation" into the borough.

But other modern structures will soon be removed from Smith's repertoire of visitor-orienting landmarks. Plans call for the demolition of both the Visitor Center and Cyclorama building and their parking lots, the underground relocation of 6,700 feet of power lines and a restoration of the landscape as it once was.

Park spokeswoman Katie Lawhon calls the upcoming rehabilitation project the most "comprehensive" and "complex" of all. But before anything changes, the Gettysburg National Military Park needs for Congress to allocate more than $2.5 million in federal project funds. The total cost of the project is estimated at more than $9.5 million, but the Gettysburg Foundation has committed $7 million from fundraising efforts.

The park is relying on Congress to make up the balance, and it's requesting that the funds be included among the 2009 allocation of Centennial projects for parks nationwide. In 2016, the National Park Service turns 100 years old. Park service officials and preservation groups are pushing Congress to commit millions dollars for hundreds of park improvement projects nationwide to be completed before that birthday.

Almost $25 million in federal funds were committed to the initiative this year for a total of 110 improvement projects at 76 different parks. Gettysburg is not on this year's list, but officials have requested that the Cemetery Ridge area be included on the 2009 list. If the Gettysburg battlefield is going to return to a look more 1863 than 2008, Congress needs to pay up, Lawhon said. "We couldn't do it without funding," she said. 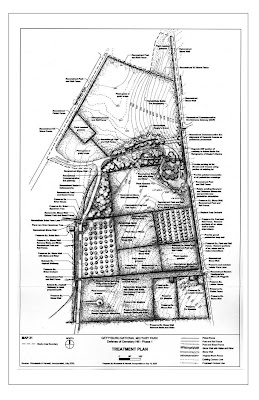 This diagram shows the outline of the 43.5 acres of Cemetery Ridge planned for rehabilitation. It details plans for reconstructing the area to look much as it did during the Battle of Gettysburg in 1863. (Graphic Courtesy National Park Service)

Almost 145 years ago, men in blue uniforms stood and fought for three days on this land, in defiance of a Confederate Army that lined a distant tree line and the town below. When thousands of those soldiers marched across the field of Pickett's Charge on July 3, 1863, the southern portion of this 43.5 acres was crucial to the Union's victory. The northern part was considered the key to the Union line, though that's difficult to discern with all the modern development.

"This area has seen a lot of action," Smith says while standing on the northern end of Cemetery Ridge, just west of the Cyclorama building. Nearby stands the statue of Union Gen. Alexander Hays, whose brigade fought on this land, much of which was transformed into parking lots and welcoming centers for tourists between the 1930s and 1960s.

Smith gestures toward the Cyclorama building, where an artillery battery supporting Hays was posted. That building - built in 1961 and designed to house the 19th Century circular painting that depicts Pickett's Charge - is scheduled for demolition, though a lawsuit was filed last year by the Recent Past Preservation Network to stop the razing. It's just one example of what wasn't there in 1863 - and what the park service would like to eliminate in 2009.

In addition to demolishing the two buildings, the park wants to eliminate most of the parking lots, sidewalks and other modern intrusions. About 6,700 feet of power lines along Taneytown Road from Steinwehr Avenue to Granite School House Lane will be relocated underground. And some things removed will return - including seven monuments placed by veterans of the war but relocated during the construction of the Cyclorama building.

Stone walls built by soldiers, which once ran through what are now parking lots and sidewalks, will return. Some trees will be removed, others planted - all to resemble what the land looked like during the battle. When all the work is done, someone sitting at McDonald's on Emmitsburg Road will be able to look up the hill and see the National Cemetery, Smith said. 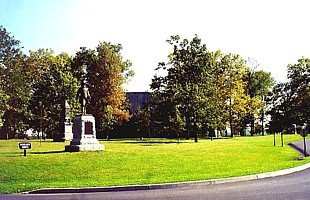 In 1863, much of this 43.5 acres of land - with the exception of Ziegler's Grove - was used for agricultural purposes, Smith said. Hay, wheat and corn were planted here, he said. The crops are unlikely to return, but meadow grass will be planted in its place, Lawhon said. That's because "rehabilitation" is different than "restoration." Restored land would return to exactly how it once was; rehabilitated land, however, is meant to resemble what once was. "Rehabilitation means we're just trying to give people a sense of what it looked like at the time of the battle," Smith said.

Smith talks about the way tree removal at Devil's Den has helped park rangers and battlefield guides explain each army's sight lines during the battle. He hopes the park's project will do the same for rangers explaining the action on this piece of the battlefield. "It's a lot easier to try to imagine," he said. "It brings things in a little bit closer."

There is no guarantee that the Gettysburg National Military Park will get the $2.5 million worth of federal funds in 2009 as they've requested. But the project has already been endorsed by the Department of Interior for potential Centennial funds. In fact, it was actually Gettysburg officials who requested the project be placed on the list of 2009 projects, rather than 2008 projects, Lawhon said.

"Because we had our hands full of the museum opening, we asked for it to be pulled," she said. The list of National Park Centennial projects this year includes $187,500 federal funds committed to another Pennsylvania park, the Valley Forge National Historical Park. That money will go toward two educational programs and the creation of a new trail near George Washington's headquarters site.

The most money committed to one park project in 2008 is $4.5 million for the construction of Wisconsin Avenue Plaza at the Georgetown Waterfront Park in Rock Creek Park, in Washington, D.C. Lawhon said that Gettysburg park officials hope to begin the rehabilitation of the Cemetery Ridge area in 2009, assuming they get the funds needed to do the work.

Now that the huge undertaking of opening the new $103-million Gettysburg Military Park Visitor Center and Museum has been completed, there may be the time to do it.
And Lawhon said she takes the endorsement of the Department of the Interior as an indication that Gettysburg is on the national radar as a priority. "That's kind of like making a short list," she said.