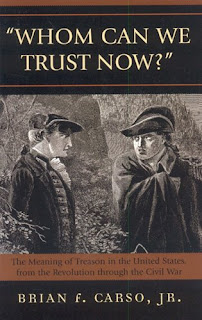 "Whom Can We Trust Now?": The Meaning of Treason in the United States, from the Revolution through the Civil War,Brian F. Carso, Jr., 262 pp., Rowan Littlefield Publishers, $50.00. (paperback expected in late 2008)

For several hours in August 1787, the delegates to the Philadelphia Convention debated the two sentences defining treason that would serve as the only criminal law in the U.S. Constitution. As storied and controversial as this ancient crime was, the meaning of treason for the new democratic republic was difficult to foresee. Historian and lawyer Brian Carso demonstrates that although treason law was conflicted and awkward, the broader idea of treason gave recognizable shape to abstract ideas of loyalty, betrayal, allegiance, and political obligation in the United States. Taking an interdisciplinary approach, Carso begins by exploring the nature of loyalty and betrayal in a democratic republic, using examples ranging from Socrates in Plato's Crito to the dilemma of Robert E. Lee in 1861 and the trial of Timothy McVeigh in 1997. Turning to legal history, the study considers the historical antecedents of the Treason Clause of the U.S. Constitution and examines the utility of American treason law as it was applied in a variety of cases, most notably in the 1807 trial of Aaron Burr, in which Supreme Court Justice John Marshall used twenty-five thousand words to explicate the Treason Clause. Finding that the antinomies of treason law in a democratic republic make successful prosecutions against treason nearly impossible, Carso turns to the political, intellectual, and cultural realms of civic life to identify and to explain the broader meaning of treason. The study investigates the perpetual condemnation of Benedict Arnold and the many ways treason animated civic discourse during the Civil war. By examining editorials, sermons, histories, orations, art, literature, and political cartoons, Carso identifies how the meaning of treason engaged the public imagination in a variety of compelling forms and instructed citizens on loyalty and betrayal outside the courtroom as much as within it.

Table of Contents
"What is a Traitor?" Loyalty, Betrayal and the State
"A Republic, if you can Keep It" The Evolution of Treason in America, 1620-1787
"Seasons of Insurrection" Early Rebellions and the Trial of Aaron Burr
"The Damnation of His Fame" Benedict Arnold and the Cultural Punishment of Betrayal
"With Malice Toward None" Treason, Amnesty, and the Language of Betrayal During the Civil War

About the Author
Brian F. Carso, Jr., holds graduate degrees from the University of Rochester, SUNY Buffalo School of Law, and Boston University, where he received his PhD in American Studies. A practicing attorney, he has held public office in both county and state government. He is currently an assistant professor of history at College Misericordia in Dallas, Pennsylvania.

Text: from publisher
Posted by Rea Andrew Redd at 3:37 PM