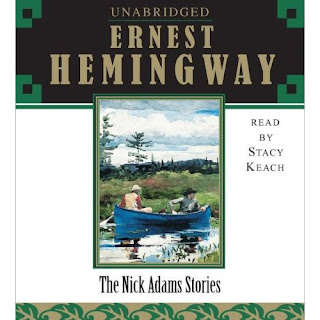 The Nick Adams Stories collection was published in 1972, eleven years after Hemingways' suicide. I encountered them a year later as an undergraduate enrolled in a Hemingway/Faulkner seminar. The simple, newspaper-like sentences were crisp, clear, declarative. In 1973, if queried about my future I would have said 'newspaper writer'.

The stories were collected from previous anthologies: In Our Time and Men Without Women and literary journals. Arranged in the chronological sequence of Nick Adams life, these stories show the character from early childhood, through the Great War, and into parenthood. The first section, The Northern Woods, describes a child's experience of fear (Three Shots), birth and suicide (Indian Camp) and disappearance of the Native Americans (three stories).

Currently anthologized stories come from Part II: Light of the World, The Battler, and The Killers. In Parts III, IV, and VI, short story writers' models appear: Now I Lay Me, Big Two Hearted River, The Three Day Blow, and Fathers and Sons. Also, The Nick Adams Stories have been made into a film, Adventures of a Young Man in 1962. Paul Newman can be recognized under a boxer's ravaged face from the segment, The Battler.

In this audiobook, Stacey Keach does a fine job of carrying Nick's and all the other voices. A quibble: the bass viola interludes between the stories drains, deadens and distracts from Keach's work.
Posted by Rea Andrew Redd at 10:49 PM