CWL---Critics of the Lincoln Memorial Insult It's Designers Intelligence 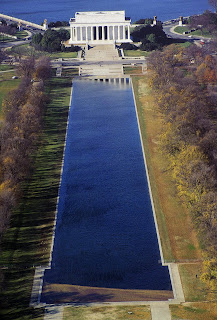 Andrew Ferguson, author of Land of Lincoln, notes that four score and six Memorial Days ago, the ribbon was cut on the Lincoln Memorial with Robert Lincoln, and Presidents Howard Taft and Warren Harding officiating. The designers of the 1922 outdoor sculpture did not foresee that it would be interpreted as imperialist propaganda. Ferguson notes Lewis Mumford's remarks. "One feels not the living beauty of our American past, but the mortuary air of archaeology" and "Who lives in that shrine, I wonder---Lincoln... or the generation that took pleasure in the mean triumph of the Spanish America [War] and placed the imperial standard in the Philippines and Caribbean?"

Today many critics have drank from Mumford's fount. Kristopher A. Thomas , author of The Lincoln Memorial and American Life understands the memorial to be "a confection of a cultural and political elite bet on stripping Lincoln of his earthly imperfections." For Thomas and others who Thomas quotes, the memorial's designers were political reactionaries who induced a politico-cultural program into the memorial for the purpose of controlling the populace by sedating it with a mythology.

Ferguson assures the readers that the designers were as intelligent and worldly as the critics. A North Carolinian architect and a Yankee sculptor rejected proposals to idealize Lincoln's visage and dress him in clothes other than plain civilian attire. (CWL---Lincoln in a toga, like Washington in the Museum of American History?)

The designer wanted Lincoln seated, not standing like military commanders, with a reflective and contemplative expression on his face. With hair uncombed, a crooked tie, tension in his hands and the eyes not quite symmetrical, the designer's Lincoln is certainly not stripped of his earthly imperfections. For Ferguson, the memorial is not a starry-eyed, naive expression of imperialism but a subtle and natural expression of awe. 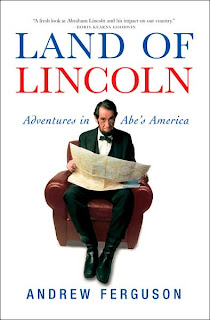 Ferguson quotes Harding's dedication speech to reinforce this opinion. Lincoln "was a very natural human being with the frailties mixed with the virtues of humanity. There are neither supermen nor demigods in the government of republics. It will be better for our conception of government and institutions if we will understand this fact." The truth of this statement for Ferguson is found on the walls of the memorial. There are no hidden codes of imperialism in the monument. "In the Gettysburg Address, in which Lincoln reminded his country that it potential for greatness lived in its founding proposition." The memorial is large and is perfect in form and scale because it honors "not just a man but a proposition---an idea that no wised-up debunker can hope to deflate."
Posted by Rea Andrew Redd at 10:52 AM

I've enjoyed what you have to say about the momument and Lincoln. There are always nay-sayers.
Michael