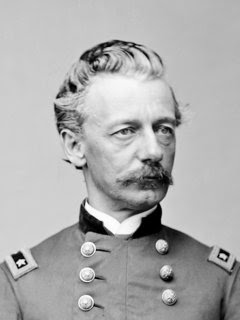 In their quest to find something new to write about the battle of Gettysburg, Civil War authors have curiously overlooked the men commanding the seven infantry corps that comprised the bulk of the Army of the Potomac. Winfield Scott Hancock (II Corps) and Dan Sickles (III Corps) have been the subjects of excellent modern biographies, but John Reynolds (I Corps), George Sykes (V Corps), John Sedgwick (VI Corps), Oliver O. Howard (XI Corps), and until now Henry W. Slocum (XII Corps) have not received serious biographical treatment in the last forty or fifty years, if ever. With Brian Melton's solid biography of Henry Slocum now on the shelves, it's three down, four to go.

Civil War aficionados best remember Slocum, when he is remembered at all, for his role at Gettysburg, but Melton indicates in his title that there is more to the story. He begins by briefly tracing Slocum's prewar career, including graduation from West Point in 1852, resignation from the stagnant prewar army in 1856, and success as a businessman and investor in Syracuse. In 1858 Slocum was elected as an antislavery Republican to the state legislature, and was sufficiently prominent to receive a commission as colonel of the 27th N.Y. when war broke out in 1861. He received a wound at First Bull Run, was promoted to brigadier general, and subsequently led a brigade, division, corps, and wing of the Army of the Potomac. Two months after leading his troops on the field at Gettysburg, Slocum was transferred west with the XII Corps, to serve at Chattanooga under William T. Sherman and eventually in the march to the sea.

How could someone who participated at a high level of command in so many important campaigns be accurately described as a "forgotten general?" One reason is that Slocum left few documentary traces of his career. The author takes the reader into his confidence in a forthright introduction that reveals the difficulty of finding source material. There are no substantial collections of Slocum's papers, and historians have written little about him, with the exception of his role at Gettysburg.

A second reason Slocum has been forgotten is that he was something of a military chameleon, taking on the characteristics of whichever officer he happened to be serving under. In the Peninsula Campaign, he displayed a McClellan-like devotion to drill and pessimism about victory, as well as a tendency to overestimate the size of Confederate forces opposing him. He nonetheless did well enough in command of a division to earn a promotion to major general, and in the Antietam campaign his small but significant victory at Crampton's Gap brought him command of XII Corps. When McClellan was replaced by Ambrose Burnside, who was in turn replaced by Joe Hooker, Slocum tended to emulate his new leaders, in particular showing some of Hooker's battlefield aggressiveness as well as much of his penchant for army politics. Slocum considered Hooker a "worthless loafer" (p. 94) and a "braggadocio and drunkard," (p. 95) and after the battle of Chancellorsville he devoted himself to getting Hooker removed from command of the Army of the Potomac, just as Hooker had maneuvered to remove Burnside. Slocum's effort, like Hooker's, was successful; the army replaced Hooker with George Meade just before the battle of Gettysburg.

Slocum's performance at Gettysburg is the one moment in his career that has attracted substantial attention from historians, little of it favorable. In the late afternoon of July 1, 1863, he led the XII Corps onto the battlefield, too late to prevent the defeat of I and XI Corps. Melton argues that an acoustic shadow prevented Slocum from hearing the sounds of battle clearly, and that in any case he delayed his march at Two Taverns only for a few hours, not a whole day as some detractors of "General Slow-come" have written. Melton convincingly defends Slocum against charges of sloth or cowardice, but acknowledges that his cautious advance reflected the continuing influence of McClellan's command style. On July 2, Slocum executed Meade's ill-judged order to reinforce the Union left wing by moving almost all of XII Corps away from the army's right flank, leaving it dangerously exposed, another move for which historians have blamed Slocum. Melton's explanation of Slocum's performance verges on the kind of Monday morning quarterbacking that fills the pages of too many traditional Civil War military histories, but does effectively exonerate him by showing both that he was following Meade's orders, and that by the end of the day he had returned to Culp's Hill and stabilized the situation.

When the XI and XII Corps received orders to transfer to Tennessee in September 1863 under the command of Joe Hooker, the move put Slocum once again under his old enemy. Both generals complained to Lincoln, until Slocum was finally given a new assignment as the military administrator of Vicksburg, Mississippi. Not until Hooker resigned in a fit of pique at the height of the Atlanta campaign was Slocum recalled to his old corps. Serving under Sherman, Slocum again adapted to his environment and became a proponent of a hard war against Southern property. He led the left wing of Sherman's army on the March to the Sea, by far the largest force he had commanded.

After the war, Slocum again served as a military administrator in Mississippi, where he zealously enforced the rights of the recently freed former slaves, but his political sympathies were evolving toward his former foes. He resigned from the army in September 1865 and joined the Democratic Party, effectively committing what Melton describes as "political suicide." He spent the rest of his life in Brooklyn, 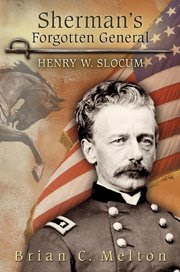 where he was involved with the construction of the famous bridge named after the city, and served a term in Congress, but for the most part he simply faded away, overlooked by Republican historians and journalists who wrote him out of their accounts of the war because of his political defection afterward. Melton's sturdy biography may not be enough alone to rescue Henry Slocum from the fate of being "Sherman's forgotten general," but in taking the focus away from Slocum's moment at Gettysburg, it at least reminds the reader that there was much more to his career.

Copyright (c) 2008 by H-Net, all rights reserved. H-Net permits
the redistribution and reprinting of this work for nonprofit,
educational purposes, with full and accurate attribution to the
author, web location, date of publication, originating list, and
H-Net: Humanities & Social Sciences Online.