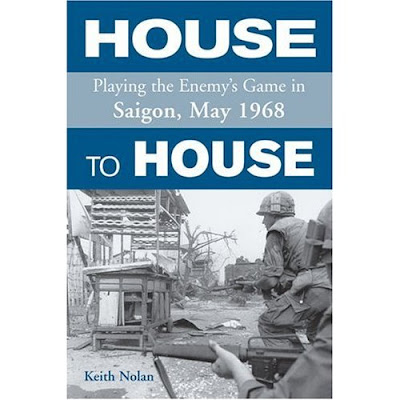 Keith Nolan's House To House: Playing The Enemy's Game in Saigon, May 1968 relies on nearly 200 participant interviews from 12 units engaged in the post-Tet Offensive attack on Saigon. His book is one of the best descriptions of Vietnam combat CWL has read. The writing relies on the words of the soldiers, some of which are very personal. Descriptions of small units engaging the enemy in urban warfare and descriptions of both heroic and disappointing leadership are fairly balanced. The accounts of the Vietnamese civilians caught in the crossfire are stunning; the use of testimony of the medical staff, the civilian news reporters and both army and civilian photographers is incisive in a manner not often presented in combat books. In particular, the account of a massacre of news reporters in a jeep, as narrated by a survivor is stunning.

Incidents of combat causalities inflicted by friendly fire are presented with the actual causes of the friendly fire; in one instace the drop mechanism on a helicopter rocket launcher malfunctions with disastrous results.

The black and white photographs are selected both from division archives and personal collections; many photographs were taken during combat. Those photos from the Ken Pollard Collection are particularly striking. One in particular stands out. Ken Pollard, a combat photographer, is pulled out of a street and into cover after being wounded. The soldier who is pulling Pollard out of the street is Ransom Cyr, a fellow combat photographer, who was killed by a sniper upon immediately reaching cover with Pollard.
Posted by Rea Andrew Redd at 9:31 AM