Off Topic Novel--- Heart Shaped Box: Beware of Ghosts Offered Over The Internet 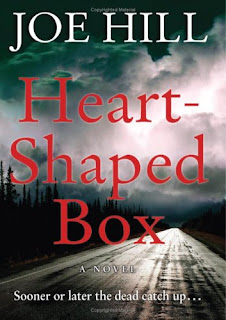 A spoiled Goth rock star buys a dead man's suit, advertised with a ghost included, over the Internet. By page 205 in the paperback edition, the author reveals what this reader learned very early in the story: "In time Jude (the 50+ heavily bearded rocker) had developed something like an immunity to the condition of feeling stupid. So when he paused, it wasn't out of a reluctance to speak but because he honestly didn't know what to say."

Jude Coyne, aging head-banger, comes with baggage: a coke-addled brain, a live-in groupie who was a former pole-dancer, a business manager who gave his sister a hot shot of heroin, an abusive father who hates rock and roll and takes a hammer to Judes' fingers at a very early age and this father is now on his deathbed. The Ghost comes with baggage: formerly a army intelligence off icier in Viet Nam whose daddy handled snakes during worship services, formerly a step-father who raped his step-daughters and who had designs before he died on his grand-daughter. One of his victims was a live-in group of Jude Coyne; the other victim is the advertiser of the suit with the ghost. These coincidences pile up every third or fourth chapter. With the pace and descriptive style of a graphic novel, Joe Hill's story is reminiscent of Stephen King's early novels and like-wise this reader sees a C+ movie being belched from Hollywood.

Now, why did I read Heart Shaped Box? 1.) The reviews. 2.) I like classic horror and have shelf of it with my several shelves of classic detective fiction. 3.) I was sick with a three-day cold. But I don't regret that I did read it. Though the characters are simple-minded and emotionally dull, there were elements of the plot I enjoyed. How does one kill a ghost whose purpose in the afterlife is to kill you and your friends? How does a step-father carry his sociopathology successfully into the afterlife? How do the dead take revenge on the dead? All interesting questions, if you suspend some of your disbeliefs about the nature of the afterlife. So, I have Joe Hill's short story collection, 20th Century Ghosts, in a second hand paperback edition and will get to it sometime when I'm sick.
Posted by Rea Andrew Redd at 12:05 PM