New This Month---If Eric Says Its So, Its Probably So. 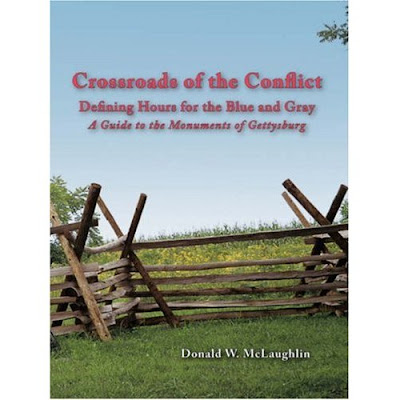 Crossroads of the Conflict: Defining Hours for the Blue and Gray: A Guide to the Monuments of Gettysburg, Donald W. Mclaughlin, 376 pages, Outskirts Press, paperback, $34.95.

"Don's book is an invaluable resource in locating the numerous monuments that exist on the Gettysburg Battlefield. It's the easiest guide to use, as it has a great index and the numerous maps he drew are excellent. Even more impressive to me, is the fact that the book contains an accurate inscription of every monument on the field!" - Eric A. Campbell Park Ranger Gettysburg National Military Park

Crossroads of the Conflict: The Defining Hours for the Blue and Gray, offers the reader important information about the Battlefield that is not contained in a single volume prior to the release of this work. This book provides the factual recordings of the inscriptions on the monuments of the Battlefield at Gettysburg. These are the monuments that stand as a symbol to American’s struggle to survive as a nation. Through this book the words upon the monuments come to life as a lasting memorial to those who died during this conflict. Crossroads of the Conflict, is unique. It is a chronological study of the monuments in the order in which the events took place as the battle progressed. This book can be used to provide the reader with a hands-on reference while touring the Battlefield by bus, car or on foot. It also serves to offer the reader an historical account of the significance of each monument, brigade marker and flank marker (left and right) on the battle grounds. In addition, the author has included numerous hand-drawn maps throughout the book to assist the reader in understanding how, the Battle itself, unfolded.

The story of the Gettysburg Battlefield is depicted on over 1,300 monuments/markers and 400 cannons that have been placed on the Battlefield throughout the past 140 years. The Gettysburg National Military Park currently encompasses 6,000 acres and is the site of one of the most visited battlefields in the United States. It is located in south central Pennsylvania, 50 miles northwest of Baltimore, Maryland. The Battle of Gettysburg was the largest and northernmost battle fought during the Civil War.

Donald William McLaughlin was born in the Bronx, New York in 1917. He spent his childhood on Long Island and eventually moved to upstate New York to work for the General Electric Corporation in the 1940’s. During WWII he enlisted, serving as a civil engineer in the United States Military along with his 3 brothers, Robert, James and William McLaughlin. He married Shirley Glaesser of Pittsfield, Massachusetts in 1948 and had seven children. He was a crucial player in changing the railroads from steam to diesel in the 1940’s and 50’s.He retired from General Electric in 1981 and moved to Gettysburg, Pa. in 1983 to become a Licensed Battlefield Tour Guide which he continued until 1997. McLaughlin was an avid photographer and developed his own photos. He was also an Amateur Cartographer. He published a number of articles from 1950-1980’s in history and train magazines. His maps and photographs are in print in Gettysburg: Stories of Men and Monuments: As Told By Battlefield Guides by Frederick W Hawthorne. Additional maps are in Crossroads of a Conflict. He was a member of many Civil War Roundtables in the Gettysburg Area for more than a decade. Beginning in 1981 he mapped out the battlefield on foot, spending over 10 years locating every single monument that he could discover and chart. Through this work he developed the most extensive record of battlefield monuments available to the public.

CWL: Amazon.com offers it for list price and free shipping; the publisher is offering it at 20% off plus shipping. Also, the publisher offers it for $20.00 when ordered as a download. The Licensed Battlefield Guide test is this December; I'll probably pick up a copy in Gettysburg in July while I'm on the battlefield tours and wearing blue wool at the reenactment.

I just received my copy of Crossroads of the Conflict. It is not your typical monument book. There are no color or even black and white photos of Gettysburg monuments, of course we have several of these references already. But instead a published "notebook" filled with information on all the parks monuments with sketchs of every corner of the battlefield. Donald W. McLaughlin, who died in 2000 left an detailed manuscript that his beloved family published. McLaughlin sketched the battlefield while a guide there between 1983-1997. This is a incredible reference source with detailed notes of every inscription on each monument as regarding the battle of Gettysburg. It is also in a format much similar to a 8x11 workbook, that you can add your own notes to and feel you are walking along with the late Mr. McLaughlin. I know I will be using this 304 page volume for my future Gettysburg book.
Arthur B. Fox, author of: