New and Noteworthy---Guelzo's Gettysburg: Compelling, Clear And A Bit Controversial 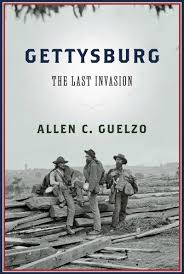