Off Topic---No Easy Day: The First Hand Account Of The Mission That Killed Osama Bin Laden 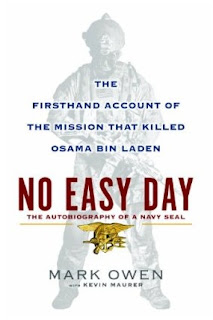 No Easy Day: The Autobiography of a Navy Seal, The Firsthand Account Of The Mission That Killed Osama Bin Laden, Mark Owen with Kevin Maurer, Dutton Publishing, 316 pp., 24 illustrations and maps, list of confirming sources, 2012, $21.95.

Mark Owen is a pseudonym of former member of the U.S. Navy's Special Warfare Development Group [Seal Team Six]. No Easy Day is similar to the oral history work of Studs Turkel, a Chicago newspaper feature writer and bestselling author.. Kevin Maurer, an embedded writer with U.S. Special Forces in Afghanistan, is the co-author of the book.   Owen describes his career and several of his Seal Team Six mission.   The mission that killed Osama Bin Laden is described in the latter half of the book, which was written and published without clearance from the Department of Defense. After the September 2012, the identity of the author was revealed to be Matt Bissonnette and the Department of Defense confirmed this.

Bissonette describes his early in Alaska, his long desire to be a SEAL and  the rigors of  his admission to Seal Team Six. His work in  several operations, including the Maersk Alabma hijacking rescue, is described as well as the camaraderie, professionalism, and dedication of the team's members. Owen's participation in the raid that killed Osama Bin Laden is offered from a boots-on-the-ground perspective and is quite similar to the film Zero Dark Thirty.  Furthermore the emotions, sights, smell and tremors of the events are delivered with a brisk and compelling narrative style.
Posted by Rea Andrew Redd at 11:27 AM

Labels: Off Topic: War on Terror