New---North Carolina's Life Line of the Confederacy: The Wilmington and Weldon Railroad 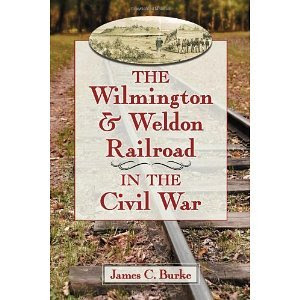 James C. Burke has had a long interest in the story of the Wilmington & Weldon Railroad. His first book on the topic, published in 2011, was entitled The Wilmington & Raleigh Rail Road Company, 1833-1854. It focused on its founding and early development. The book being reviewed here, The Wilmington & Weldon Railroad in the Civil War, continues to trace the story of the railroad during the Civil War years.
The Wilmington & Weldon Railroad has been called the “lifeline of the Confederacy” especially during the last years of the war. Burke, however, shows that the story of this railroad line is much more complex. He demonstrates that the railroad not only transported badly needed supplies from the port city of Wilmington to Robert E. Lee’s Army of North Virginia, but also served as an important link to other railroads that were bringing in supplies from other areas of the Confederacy.
Burke shows that the railroad achieved much and deserves its “lifeline” title, but it was also plagued with numerous problems. For example, different sized railroad gauges used by trains coming from other Southern states caused some problems. Having to unload and reload food in order to change trains often resulted in food left piled up for days and spoiling while Lee’s army starved. Other challenges included several Union raids, such as those launched by Major General John G. Foster’s forces from New Bern, North Carolina. The tracks were repaired fairly quickly, but the raids demonstrated the vulnerability of the railroad. The greatest problem, however, was the fact that the railroad was simply not designed to handle the large volume of goods and soldiers that a war demanded.
There are many strengths and some weaknesses in this book. On the one hand, Burke’s uncovering of the railroad acting as a conduit for supplies from across the South has already been mentioned. Burke also dug deep into records and primary sources making this a very well-researched book. On the other hand, his fondness for numbers and details--the amount of food, clothes, soldiers, etc., transported--sometimes lacks a human element. What would have made the book a better read, perhaps, is greater focus on the personalities involved, such as S. L. Fremont who took over leadership of the railroad after the untimely death of President William S. Ashe. Fremont was a key force in keeping the railroad going despite all of its challenges. Then, too, the book sometimes drifts off into a history of the city of Wilmington and the problems it faced during the war, which is interesting but is a bit off target. Nevertheless, this book is very well-researched and provides a solid and insightful picture of the impact of the Wilmington & Weldon Railroad on the American Civil War.
Text Source: H-War
Posted by Rea Andrew Redd at 10:00 AM