New and Noteworthy---Yankee News Writers Amazing Escape From The Confederacy 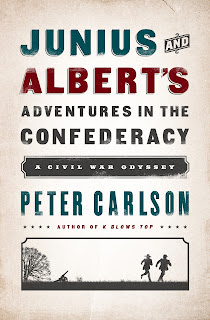 From the Publisher: The thrilling true story of a pair of reporters swept up in the Civil War, captured, and thrown into jail, and their attempt to escape and return home to file their own extraordinary story.  Albert Richardson and Junius Browne, two correspondents for the New York Tribune, were captured at the Battle of Vicksburg and spent twenty months in horrific prisons before escaping and making their way to Union territory.

Their amazing, long-forgotten odyssey is one of the great escape stories in American history, packed with drama, courage, horrors and heroics, plus many moments of antic comedy. They must endure the Confederacy's most notorious prison; rely on forged passes and the secret signals of a covert pro-Union organization in North Carolina; trust a legendary guerilla leader; and ultimately depend on a mysterious, anonymous woman on a white horse to guide them to safety. They traveled for 340 miles, most of it on foot, much of it through snow, in twenty-six days. This is a marvelous, surreal voyage through the cold mountains, dark prisons, and mysterious bands of misfits living in the shadows of the Civil War.

Peter Carlson is the author of K Blows Top, which has been optioned into a feature film. For many years, he was a reporter and columnist for the Washington Post. He has also written for Smithsonian magazine, American History magazine, and the Huffington Post. He lives in Rockville, MD.

Blurbs: “This absorbing story of two Northern war reporters who were captured by the Confederates at Vicksburg, imprisoned for nineteen months, and escaped two hundred miles to Union lines demonstrates that for the Civil War, truth is indeed more thrilling than fiction. The accounts of the essential help the escapees received from slaves and Southern white Unionists provides key insights on Southern society.” James M. McPherson, author of Battle Cry of Freedom


“Unspools like a buddy flick…Carlson’s story has so many twists, right up to the last page….But the exquisite plot is only one of the joys of reading this book….If there’s a flaw in this fine book, it’s that Carlson tells his story almost too well….[This is] a rollicking read.” Tony Horwitz, author of Midnight Rising, and Confederates In The Attic.
CWL first read the story of Richardson's and Brown's news reporting trek, capture and escape odyssey in George Cooper's 1994 Lost Love: A True Story of Passion, Murder, And Justice In Old New York.  It is truely an amazing story in the same vein as the escape saga of several of the Andrews Raiders after their capture during the Great Locomotive Chase of 1862. Richardson continued career in journalism and subsequent murder is describe in Cooper's compellingly written true crime story.
Posted by Rea Andrew Redd at 11:07 AM

Here's a snippet of the story taken mainly from Albert D. Richardson's memoir:

Here is a piece of the story taken mainly from Richardson's memoir: