News---Netflix's House of Cards, The Grant Memorial in Washington D.C. and the Army of the Tennessee 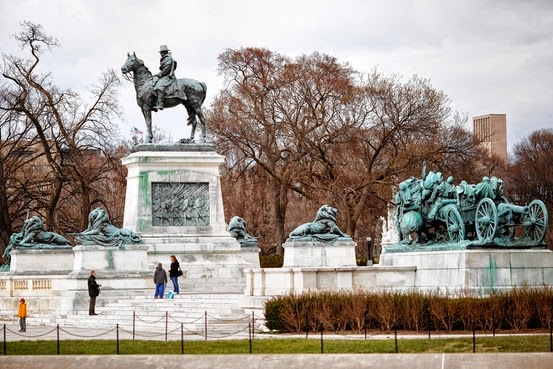 
The opening credits of "House of Cards," the new Netflix-produced political thriller, are set against time-lapse views of Washington that include the Capitol and the Kennedy Center. Yet the most prominently featured landmark, the Ulysses S. Grant Memorial, is likely to be less familiar to most viewers.
Honoring a hero and symbolizing the nation's new prominence on the world stage at the dawn of the 20th century.

Its relative obscurity today is unfortunate, because this monument is one of the greatest works of commemorative art this country has produced. More than a monument, it is a symbol both of Washington's aspirations as a city at the dawn of the 20th century and of the nation's increasing prominence at that same moment.

More than 250 feet wide and 70 feet deep, the memorial sits at the foot of the Capitol. An expansive reflecting pool fans out before it, with the National Mall beyond. At the center of a broad stepped marble plaza, a bronze portrait of Grant stands atop a tall marble pedestal. Four recumbent lions flank the statue, while low-relief panels on the pedestal's sides depict marching infantrymen. On either side but at some remove are two massive bronze sculptural groups, one depicting a cavalry charge, the other a field artillery unit wheeling into battle position.

After his death in 1885, Union veterans who had served under Grant campaigned for a monument to be erected in Washington. Their efforts led to Congress appropriating $250,000 in 1901, at that time an unprecedented sum for a federally funded monument. The following year, the three-member Grant Memorial Commission selected New York sculptor Henry Merwin Shrady from a field of 27 candidates, most with far more experience in the realm of public sculpture.

The memorial would become his life's work. He spent 20 years on it and died at the age of 52, just weeks before its dedication in 1922. But if you're going to leave only one masterwork, you could do a lot worse than this one. The visitor who takes the trouble to seek it out is rewarded for the effort.

The project's ample budget allowed for a more complex memorial than the standard general-on-horseback. The massive cavalry and artillery groups are placed on low pedestals complemented by built-in seating. They provide a portrait of men and horses gripped by war's hardship and carnage seldom seen in earlier memorials.

In the former, a cavalry captain leads the charge with sword upraised. The soldier beside him, a self-portrait of the sculptor, tumbles headlong over the mount that has been shot from beneath him. The rider behind shields his eyes with his forearm. Across the plaza, Shrady presents another scene of struggle and endurance. Traversing rough and muddy terrain, a field artillery unit, pulled by a four-horse team, comes to a halt. The horses strain; one breaks free from his reins and presses forward. With expressions ranging from pain to stoicism, three soldiers ride atop the caisson gripping whatever they can for support and bracing themselves against one another.

Shrady presented Grant much as had other sculptors, as a brooding, taciturn leader astride a horse that is both still and alert. But his portrayal of soldiers at war creates a powerful counterpoint. Grant is the calm center overseeing the maelstrom of battle. In this way Shrady memorialized not only the leader, but his troops and the relationship that existed between them. Shrady's presentation of troops under duress introduced a thematic tone that set it apart from nearly every earlier Northern monument. The earliest major Civil War monuments, built in the decade after 1865, mourned the dead. Those erected in the 1880s and '90s typically celebrated the Union's triumph. But the Grant Memorial presents the specter of war and sacrifice as ongoing, an idea embraced by many in 1900 as a fact of modern American life.

CWL notes that the "Union veterans who had served under Grant campaigned for a monument to be erected in Washington," were the veterans of the Army Of The Tennessee. The drive to erect a monument to Grant was begun in the 1890s by Society of the Army of the Tennessee.  The Grant Memorial is situated in Union Square and is situated beside the Capitol Reflecting Pool.  The marble platform for the monument is 252 feet long, 71 feet wide and is divided into three sections. The tall, middle section features a 10,700 pound, 17-foot-2-inch  high equestrian statue depicting Grant astride Cincinnati his war horse which rests on on a 22½-foot high marble pedestal.  These dimensions are in  James M. Goode's The Outdoor Sculpture of Washington, D.C.: A Comprehensive Historical Guide [1974] as cited in the online encyclopedia  entry for the U.S. Grant Memorial.