New and Noteworthy: The Chattanooga Campaign---Well Written and Thought Provoking 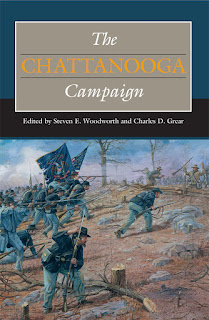 The Chattanooga Campaign is a collection of 10 distinctive essays that address key features of the autumn 1863 turning point of the war.  Steven E. Woodworth and Charles D. Grear continue to present new and important perspectives in The Civil War Campaigns in the Heartland Series from Southern Illinois University Press. Strategies and tactics, commanders and soldiers, the public press and post-war preservation are considered by military scholars and historians.

Important questions addressed include: How was Lookout Mountain won and lost? How did Sherman assault and Cleburne defend Tunnel Hill? What happened on Orchard Knob that allowed Thomas to assault Missionary Ridge? Was the Confederate army out-fought at Rossville Gap and Ringgold Gap?  How did the Cincinnati newspaper define the Northern perception of the campaigns of Rosencrans and Grant? How did the Chattanooga preservation plan put in motion the idea of limited preservation of Civil War battlefields?