New and Noteworthy Television---Copper, 1864: The Five Points Ghetto, Homicide and Life on The Streets in Old New York 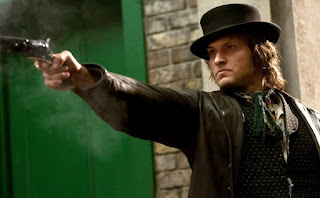 “Copper” is BBC America’s declaration of independence: the first original drama from a channel built on British imports. And unlike the science-fiction and reality fare (“Doctor Who,” “Top Gear”) that BBC America has focused on, “Copper” is a prestige product, a dark and serious show that’s being thrown into the deep end of the cable television pool on Sunday night, where its time-slot competitors include AMC’s “Breaking Bad,” HBO’s “Newsroom” and USA’s “Political Animals.”

As it turns out, American-ness is both the defining trait of “Copper” and, in a way, its biggest problem. The show looks good, offers a painless history lesson and has the potential to put an entertaining period spin on the “Law & Order” police procedural genre. But it’s missing exactly the elements that make you want to watch those British shows on BBC America: energy, irreverence, a sense of humor and, crucially, consistently good performances.
Like a lot of other current high-class cable series, “Copper” achieves a distinctly American mix: a high level of sensationalistic violence, sex and all-around turpitude presented in a package so stuffy and politically correct that it makes your eyes bleed.
The premiere episode on Sunday night drops us into the middle of the licentious 19th-century action. Kevin Corcoran (Tom Weston-Jones), a Civil War veteran, and two of his fellow policemen ambush a group of bank robbers, gunning them down in the street and pocketing as many bank notes as they can before a sergeant arrives. It’s a brisk, deftly staged scene that gets the show off to a vigorous start.
But nothing else in the two episodes sent to critics has the same kinetic charge. “Copper” settles into a cycle of stilted, stagy exposition — there’s all that history to explain — punctuated by beatings, shootings and knifings that have a protracted, antique brutality. Contributing to the premodern atmosphere are the throwing of slop to pigs, the carting around of a child’s dead body wrapped in a blanket and the prominent presence of two gaslit brothels, which also allows for nudity that goes right to the edge of basic-cable propriety.
There are several shows fighting for time within “Copper,” and the most promising one is the crime drama. Across the first two episodes Corcoran and his mates crack the case of the murder of a young runaway girl, and that’s the most entertaining part of the story (even if some of the forensics they employ seem awfully 21st century). Unfortunately, that seems to be the show that Mr. Fontana, despite the presence of “Homicide: Life on the Street” on his résumé, is the least interested in.
In its place we get a social-problem melodrama, with numerous references to historically important but so far dramatically inert issues like discrimination against Irish immigrants, the migration of freed slaves and the plans of unscrupulous developers to buy up and gentrify Five Points.
Most of the energy in these opening episodes is spent establishing, amid the general corruption and debauchery, the liberal-humanist bona fides of the central characters. Corcoran may not have a modern appreciation of the trial-by-jury system, but his vigilante tendencies are more than balanced by his close friendship with an African-American doctor (Ato Essandoh) and his enlightened sympathy for prostitutes and runaways. Corcoran’s potential love interest is a wealthy crusader, played by Anastasia Griffith (“Royal Pains”), who tries to prevent the sale of a black church to a rapacious white businessman.
“Copper” certainly isn’t alone among cable period dramas in emphasizing this kind of billboarding over actual character development. HBO’s “Boardwalk Empire,” to name the most prominent current example, suffers from the same affliction, though it’s more entertaining by virtue of being more forthrightly lurid and s"oap-operatic.
The consequence of the “Copper” approach is that while the show is probably historically “accurate” in many ways, it never for a moment feels authentic. The variability of the acting doesn’t help, though Mr. Weston-Jones, best known for the British series “MI-5,” is fine as Corcoran.
Perhaps Mr. Fontana just had a lot of stage setting to do, and the show will pick up steam. An overarching plot involving Corcoran’s missing wife and dead child has been put in place and could prove interesting. (The runaway-girl case is a reasonably clever metaphor for his situation, and ends by providing him with a surrogate daughter.) Less history, more mystery: there wouldn’t be anything wrong in turning “Copper” into “Homicide: Life on the Streets of Old New York."

Does this have anything to do with J. North Conway's nonfiction seminal work on policework in New York City during the Gilded Age, THE BIG POLICEMAN?

I watched the first episode and didn't here a mention of Thomas Byrnes. As director of an academic library, I ordered The Big Policeman for the collection a few years ago when it first appeared.