On The Battleground: Gettysburg--July 1 Confederate Assault 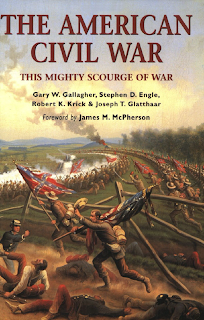 Walking into This Mighty Scourge of War, by Gerry Boehm, Field correspondent for the Civil War Librarian

This past week a painting that is the cover art for the relatively recent book titled “THE AMERICAN CIVIL WAR, THIS MIGHTY SCOURGE OF WAR” by Gallagher, Engle, Krick and Glatthaar (Published by Osprey Publishing) did not have context for many of the readers. Like Alice in Wonderland, I finally walked into this James Walker painting for the first time this past week. This cover art depicts the organized Confederate attack west of Willoughby Run and the McPherson Ridge on the first day of the Battle of Gettysburg. Burning in the background in this painting is a house. It is the burning Harman Farm.

Over the last year the Gettysburg National Military Park gained a substantial portion of land formerly known as the Gettysburg Country Club through the heroic efforts of the Civil War Trust and on Tuesday, June 19th, your humble correspondent was able to take part in a walking tour of this hollowed ground organized by Ms. Regina Hollar, Volunteer for Historic Gettysburg Adams County (HGAC) Preservation & Salvage. The walk was led by Joe Mieczkowski, Licensed Battlefield Guide, and included folks from as far away as Ohio and Virginia. 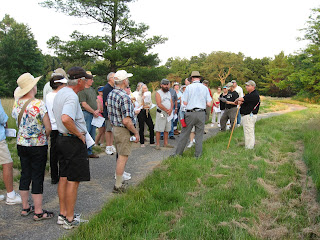 The Harman farm was burnt to the ground by the Army of Northern Virginia, but from this place where the farm stood one could look around and feel in the breezes of the approaching evening the passing columns of boys and men from Alabama, North Carolina, Tennessee and Virginia who fought and died here almost 150 year ago. All along the fields west of Willoughby Run and Herbst Woods, between the Chambersburg Pike and the Harman farm, we had entered the painting of James Walker and re-lived those crucial hours of this first day of the Battle of Gettysburg.

As a bonus, we also toured the remains of the famous post-war resort built around the Katalysine Spring and were regaled in stories of President Eisenhower and Arnie Palmer playing golf together on these very grounds. All in all an awesome ending to an otherwise rather typical Tuesday.
Posted by Rea Andrew Redd at 12:40 PM