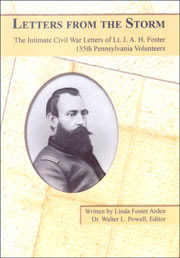 Arden offers 101 letters written by Lieutenant Foster, Company K, 155th Pennsylvania to Mary Jane Foster, his wife; the documents are separated by Arden's comments regarding the events and situations described in the letters. Complaints regarding campaigns and camp life with descriptions of individual soldiers and unit combat are a focus of the letters. Additionally Lieutenant Foster addresses his loneliness, intimate fantasies and apprehensions about his spouses faithfullness.

The campaigns and combat of Antietam, Fredericksburg, Kelly's Ford, Brandy Station, Gettysburg, Bristoe Station, the Wilderness and Cold Harbor are described. Pontoon bridges new corps flags are described and drawn. Colorful language regarding personalities and events is not absent from the letters.