Off Topic: World War 2--- Playing the Nazis For Chumps 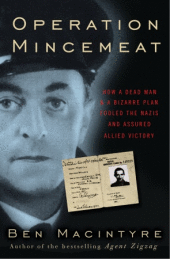 Having read and thoroughly enjoyed Ben Macintyre’s account of a British double agent,Agent Zigzag, his second effort seemed appealing. Operation Mincemeat is a thorough updating of a previous book, The Man Who Never Was, that I had read during junior high study halls.

Operation Mincemeat and The Man Who Never Was reveal the elaborate British deception of the Nazis into thinking that Allied forces were planning an invasion southern Europe from Greece or Sardinia, rather than Sicily.

Ewen Montagu, author of The Man Who Never Was and co-planner of Operation Mincemeat could not have been more different than Charles Cholmondeley of MI5 and British naval intelligence officer. Montagu was an aristocratic, detail-oriented barrister and Cholmondeley was an adventure seeker. Together they created an ingenious up tenuous plan: Plant a corpse on a Spanish beach and load it with false and misleading documents concerning the invasion. Approved by Ian Fleming (creator of James Bond) and other British intelligence officials the plan was present to Winston Churchill who believed it might look real to the Nazi and mislead them.

Presenting previously top secret material, Ben Macintyre brings the reader right into the minds of intelligence officers, their moles and spies, and the German Abwehr agents who suffered the “twin frailties of wishfulness and yesmanship.” He weaves together the eccentric personalities of Cholmondeley and Montagu and their near-impossible feats into a riveting adventure that not only saved thousands of lives but paved the way for a pivotal battle in Sicily and, ultimately, Allied success in the war. Most importantly, the corpse does not remain anonymous.

Macintyre's discovery of the identity of the corpse, its route into the hands of the British intelligence officers and then its delivery into the sea currents that took it ashore is astonishing and compelling. At the end of the book, the reader is conveyed to a Spanish cemetery that holds the body of an improverished and mentally disadvantaged Welshman who inadvertently committed suicide and afterward heroically served his country.

Top Image: Paul Davis On Crime
Posted by Rea Andrew Redd at 10:16 AM