News: Are The Iraq/Afghanistan Wars Putting A Lid on Civil War Reenactments? 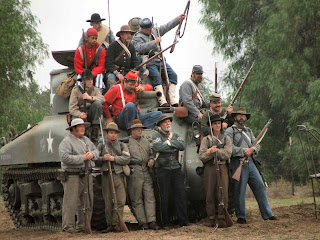 On July 4th, America's 300 million citizens will mark the 234th anniversary of the Declaration of Independence. The holiday weekend that's famous for fireworks, barbecues and apple pie is increasingly being used as an occasion for tens of thousands of Americans that identify as "hard-core" war reenactors to wear outfits made from 19th century fabric adorned with arcane military pins. For the July 4th holiday also marks another major American historical milestone — the anniversary of the Battle of Gettysburg, which took place from July 1st to July 3rd in 1863. For American war reenactors, the battle is the Gettysburg of their annual reenactment calendar.

"When you come to the fields of Gettysburg, you cannot help but feel the awe," said Andrea DiMartino, the media supervisor for Gettysburg Anniversary Committee. DiMartino, who moved to the southern Pennsylvania town fifteen years ago to be closer to the battleground site (and even has the number 1863 in her e-mail address) will help organize the weekend's reenactment festivities that runs from July 2nd to July 5th. Events are scheduled to run around the clock, and will include a reenactors' dance as well as live mortar-fire demonstrations. (In 2006, the U.S. National Park Service banned reenactment on actual battleground sites, saying, "Even the best-researched and most  well-intentioned representation of combat cannot replicate the tragic complexity of real warfare.") 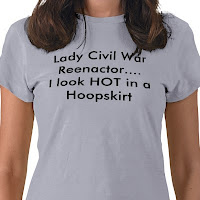 "Reenactment is a nice relief from today's electronic reality," said Kirk Davis, the president of the American Living History Educational Society, a group that has some 500 members reenacting battles from the French and Indian War up through World War II. "It's always a very safe scripted event. We have a lot of veterans, but all people like to hear the cannons going off."

War reenactment is by no means an American phenomenon. By all accounts, the impulse to dress up and play Hektor is as old as Hektor himself. Both the Greeks and the Romans infused elaborate battle scenes into their dramatic cultures. And many contemporaneous reenactors credit the tragedies of William Shakespeare, his stage designs at the Globe Theatre and his depictions of battles as a major inspiration for modern reenactment. Among the great reenactments: the 1066 Battle of Hastings that gave birth to modern England. The restaging of the Norman Invasion takes place every year in October around the same iconic hill in southeastern England, and on major anniversary years (those ending in one and six) the number of participants can reach as high as 5,000. The dressing up in 11th century war gear — medieval metal helmets and all — takes place under the auspices of a group called English Heritage, which is affiliated with the British government.

"There is something deeply democratic, and republican, in the attempt to make history your own, rather than to leave it to the academics and the schools, television stations and politicians," says Wolfgang Hochbruck, a history professor at the University of Freiburg in Germany, who was a one-time American Civil War reenactor. "Not that reenactment is necessarily progressive — a lot is politically backward at best." 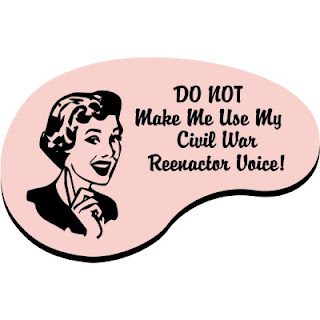 In the U.S., which compared to England and Germany is a relatively young country, no conflict has spread the reenactment bug quite like the Civil War. Reenacting the War Between the States took off as early as the 50th anniversary of Gettysburg in 1913, when veterans from both the old Confederacy and the Union returned to that battlefield. The veterans, many in their 70s, were reduced to waving their canes as they reenacted Pickett's Charge, says Tony Horwitz, the author of Confederates in the Attic: Dispatches from the Unfinished Civil War. The septuagenarians were joined by then president Woodrow Wilson, who was hoping to use the event to mark the end of animosity stemming from the Civil War.

For some participants, reenactment can be more than just an outlet for relief. "Educators today do not want to show weapons, do not want to show war," said John Houck, a Maryland-based reenactor since 1991. "We're out there teaching to the American people. In school you have two weeks to teach four years of war. My ancestors fought four years as Confederate soldiers and I applaud that. We lost the war and that's fine. But let's tell the real story. We're all Americans."

Many Civil War reenactors are gearing up for a round of 150th anniversary encampments to begin in 2011 at South Carolina's Fort Sumter. As a testament to society's enduring fascination with the Civil War, reenactments of its battles takes place regularly throughout the world, from Northern Ireland to Australia.

But after a surge of popularity in the 1980's and 1990's, when Civil War reenactors became more professional about outfit specificity and military pins, thanks in part to movies like Gettysburg and Ken Burns' documentary, numbers have dropped over the last decade from their prior high in the 50,000 range. "When we have real wars going on, a fake war is less appealing," says Horwitz.