New---Letters To A Pittsburgh Wife From A Medical Steward 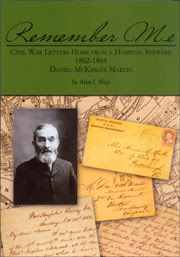 This exquisitely researched book narrates a fascinating story based on 230 letters, a diary, and possessions that have survived the past 150 years. In 1862, Daniel Martin was working as a druggist's clerk and living in Pittsburgh with his young family when he volunteered to serve as a hospital steward for the Union. His letters and diary speak of financial hardships, secessionists, medicine, diseases, generals, patriotism, the deaths of his two brothers, battles, politics, slavery, religion and family squabbles. With detailed descriptions of diseases and 19th century medical theories, these letters were written in the context of the American Civil War medicine and the political and social venues of southwestern Pennsylvania.

Alan West's commentary furnishes a ready resource for understanding the events surrounding the steward's remarkable experiences in Pittsburgh, Chambersburg, and western (West) Virginia. Remember Me offers a unique perspective for readers interested in 19th century life in Pittsburgh during the Civil War, the practice of medicine and pharmacy, a loving relationship between spouses separated by war. Historians, reeanactors and genealogists will find merits in West's editing.

CWL: As a reenactor whose impression is that of a captain in a Pennsylvania regiment raised in Pittsburgh, this books moves to the top of the 'must have list' for the personal book shelf. As a director of an academic library of a Pennsylvania university, a copy will be ordered for the library's shelf.