News---Preservationist Sleeps in Slave Cabins to Save Them 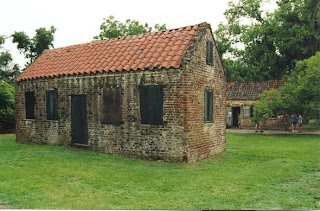 When Joe McGill spreads his sleeping bag on the floor of a slave cabin, he knows that spending the night there will conjure the specter of slavery. "If I were a firm believer in ghosts and spirits and things of that nature, I don't think I could do this," said McGill, a preservationist who is working to preserve buildings that are part of a past that many prefer to forget.

One night he heard dogs in the distance - a sound that recalled the search for runaways during slavery. He awoke on Mother's Day morning in a cabin thinking of children being sold from their mothers. Then he walked to the black graveyard on a plantation near Charleston. "I thought, this is why I'm doing this - for those people in those graves to give them a voice for what they endured," said McGill, 48.

McGill, a program officer with the National Trust for Historic Preservation, will spend Saturday night in a cabin at Hobcaw Barony near the coastal community of Georgetown. It will be the fifth night this year that he has slept on a cabin floor, trying to attract attention to the need to preserve the structures and the history they hold. 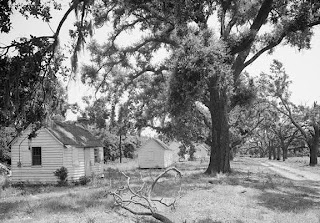 McGill, who is black, is also a reenactor with the 54th Massachusetts, the black Union regiment that fought at Battery Wagner on Charleston Harbor during the Civil War. He said spending the night in the cabins helps him connect with his ancestors. He first slept in a cabin at Boone Hall Plantation near Charleston a decade ago as part of a program for The History Channel entitled "The Unfinished Civil War" which focused on the dispute over the Confederate flag flying over the South Carolina Statehouse. He returned to the cabin project this year, meeting reporters wherever he goes to draw attention to the buildings. He said preserving the cabins requires local efforts and his goal is to encourage people to save the ones that are left. The cabins where McGill has stayed - such as those at Magnolia Plantation and Gardens near Charleston - have already been restored. But many others have been neglected.

McGill started in May with a list from the state Historic Preservation Office showing cabins at about 30 sites. He feels his effort is already helping because since he started the sleep-ins, three more cabins have been identified. McGill plans to sleep later this summer in a cabin in Anderson, in upstate South Carolina, and this fall in cabins in Alabama. "There once were thousands of slave cabins in South Carolina, mainly near the coast in the state's largest plantations. Many have not survived because they were modestly constructed of wood or because people didn't want a connection with a dark chapter of history," he said.

"When it comes to slave cabins, you are talking about a part of history that some folks would rather forget," said McGill. "I come from a chain of thought that to know is better," he said, adding that just as a plantation house tells a story, so, too, does a modest cabin. Andy Chandler, who helps administer the National Register of Historic Places for the Historic Preservation Office, said there are no firm figures on how many cabins are still standing in the state. 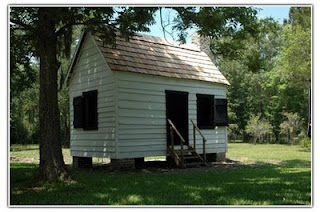 There are about 1,300 register listings in South Carolina and some may include sites with cabins. But, he said, since some sites have been on the register for decades, some of the cabins may not be there any more. And people who recommend sites for inclusion on the registry don't always see slave cabins as worth mentioning. "In the preservation field we have always considered them significant," he said. "But the historic preservation community is a limited part of our larger community."

Very interesting. That might be a bit creepy, especially hearing the dogs bark at night.

Wonderful idea. They should be saved. It's as least as important as saving battlefields.