New and Noteworthy---Allegheny County, Pennsylvania at Gettysburg, Local History At Its Best 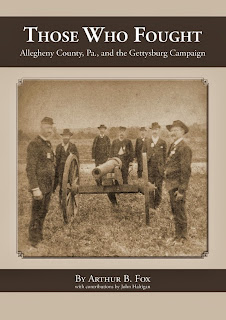 
From The Publisher: The first book that specifically recognizes the role of Allegheny County, Pennsylvania in the Battle of Gettysburg and honors the local soldiers who fought there. Although thousands of books and articles have been written about the Battle of Gettysburg, nothing specifically regarding the role of Allegheny County and the men who served has ever been published—until now. In his third book on western Pennsylvania’s involvement with the American Civil War, Pittsburgh historian Arthur B. Fox acknowledges the contributions of, and demonstrates his appreciation for, the local participants, past andpresent, in the many aspects the Gettysburg Campaign.  Those Who Fought: Allegheny County, Pa., and the Gettysburg Campaign is not simply another study or a re-interpretation of these battles. Instead, it is a commemoration of the courage, valor and sacrifice of Allegheny County soldiers who fought in the largest and deadliest battle of the Civil War.


Arthur Fox’s passion for Gettysburg history is evident in the details: lists, descriptions, monuments and vignettes, snippets of regimental records and battle reports—yet he brings it all to life through a wealth of little known, human interest stories. Allegheny County, represented by several thousand soldiers during the battle, makes up the majority of those stories. One of the most significant is that of Allegheny County’s only Medal of Honor recipient from the Battle of Gettysburg: Private Casper Carlisle (shown on the book’s cover).

In Those Who Fought, Fox delivers the most comprehensive narrative of this local hero. Among these compelling stories, the author documents the region’s impact on the battle with additional fascinating
information and images:


• Gettysburg reunions
• Care of the wounded at Camp Letterman; area physicians who volunteered to treat the Gettysburg wounded
• History, placement, and photos of area Civil War monuments
• Local contemporary groups and individuals dedicated to preserving the Allegheny County area’s
• Civil War legacy
• Numerous references and online sources; documentation from informants in letters and diaries
• Over 60 B&W and color photographs, several previously unpublished
• Images of paintings by Larry Smail, The Wheatfield: Whirlpool of Death, and by James Horton, of Casper Carlisle’s heroics near the Peach Orchard.

To begin all of this is the enlightening forward by Tom McMillan, Vice President of Communications for the Pittsburgh Penguins, and his interest and devotion to the battlefield, driven by the knowledge that several of his ancestors fought in the Gettysburg Wheatfield. Revealed later in the book is the surprise connection Fox discovered he had with McMillan’s ancestors.

Arthur Fox, a Dormont resident, received B.A.s in history and anthropology (specialty in archaeology) from the University of Pittsburgh and an M.A. in public history from Duquesne University in Pittsburgh. Fox has published more than 50 articles and is best known for his books
Pittsburgh During the American Civil War, 1860-1865 and Our Honored Dead: Allegheny County During the American Civil War. Fox formerly taught U.S. and Pittsburgh history at the University of Pittsburgh, Duquesne University and LaRoche College. For the last 14 years, he has been a permanent part-time assistant professor of world, U.S. and Canadian geography at Community College of Allegheny County, Allegheny Campus. He served in the U.S. Navy Seventh Fleet during the Vietnam War.


Contributor John Haltigan, an Allison Park resident, graduated from Northeastern University in Boston with a B.A. in history. After serving in the U.S. Air Force, Haltigan worked for more than 30 years as a personnel specialist with the Department of Veterans Affairs. Since his retirement, he has been an active volunteer at the Aspinwall Divison of the Pittsburgh VA Medical Center, where he has interviewed a number of World War II veterans for the Veterans History Project. Art and John began their collaboration after meeting several years ago at the VA Medical Center in Aspinwall, Pennsylvania.