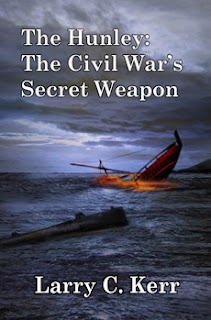 The CSS submarine H.L. Hunley plays a small part in in the Civil War but has a larger role in history. Revealing the dangers and advantages of undersea warfare, the CSS Hunley was the first to sink an enemy warship, the USS Housatonic. The current historic record is not explicit as to whether the submarine was entirely submerged during the assault. It cost 21 sailors their lives during the experimentation and assault; the ship sank three times. Constructed at Mobile, Alabama, shipped by railroad to Charleston, South Carolina, the Hunley was lost on February 17, 1864. After decades of search, the Hunley's remains were located in 1995 and recovered in 2000. It now rests in a marine labratory in Charleston.

Kerr employes quick, conversational style dialog to move the story forward from April 1861 to February 1864. The author does not provide fanicful developments to heighten the narrative or suspense. Readers who are familar with the Hunley's story will be well satified. Those who are encountering the story for the first time will be compelled to track down the original TNT Network's 1999 creative film, The Hunley. Readers seeking toto learn more about the submarine, the heroic individuals who died with it are well served by current stewards of the ship and its museum. The Friends of the Hunley offer a very fine website. The website is a fine companion to Kerr's enjoyable, fact-based novel.
Posted by Rea Andrew Redd at 5:52 PM