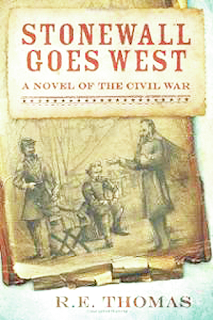 R. E. Thomas' Stonewall Goes West offers an intriguing notion. Jackson is a corps commander at Gettysburg. The July 3 Grand Assault fails and the Federal Second Corps counter-attacks. With those conditions set, the novel opens in October 1863 and the Bristoe Station campaign becomes a Confederate victory. The Federals receive 7,000 casualties, Warren is killed, Webb is wounded and captured, Hays is killed and Sykes commits suicide. Braxton Bragg's army is sent reelling away from Chattanooga. Who can save the deteriorating situation? Stonewall Jackson goes west.

Thomas' work is not quite counter factual history; it does not examine realistic alternatives and possible outcomes. Stonewall Goes West is not quite in the same vein at Gingrich's Gettysburg and Grant Comes East; it does not stay within historic parameters. The novel is not quite like Harry Turtledove's works that puts the characters in an historic environment in which their actions seems inevitable.   R. E. Thomas' Stonewall Goes West may be enjoyed as a fanciful collision of personalities and conditions. He does have some characters who are in the rank and file and not on horses. Unfortunately there is very little suspense in the story. Stonewall and his lieutenants always win.
Posted by Rea Andrew Redd at 7:03 PM