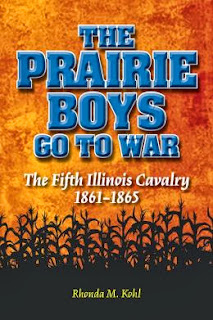 The Trans-Mississippi Theatre probably does not receive the attention from scholars and buffs that it deserves.  Without fanfare and notoriety, essential work  was done by the Federal cavalry throughout the four years of war. The 5th Illinois Cavalry was organized and trained throughout the late summer and fall of 1861and by February 1862 they were serving in Missouri. The regiment became riven by internal dissent. The differences stemmed from religious, political and geographic diversities. Roughly 60% of the troopers were from northern and central Illinois and generally Republicans; about 40% hailed from southern Illinois and generally were Democrats. Those families from southern Illinois had migrated generations before from Tennessee, Kentucky, Virginia and the Carolinas.  In many instances politics, religion, family incomes, social values and education separated the officers from the enlisted men

Throughout 1862 they fought and chase guerrillas throughout southern Missouri and northern Arkansas. In the late fall the 5th Illinois left Helena, Arkansas to participate in Grant's late 1862 and first half of 1863 campaign to capture Vicksburg, Mississippi. Keeping Confederate guerrillas out of Grant's path and guarding the paths of supply to the Federal army were the regiment's primary tasks. During the latter half of 1863 and until the summer of 1862, the regiment raided central Mississippi and performed garrison duties.  Constantly the 5th Illinois Cavalry suffered from poor leadership, low morale, camp discipline and health issues including alcoholism, typhoid, malaria, and typhus.

Rhonda M. Kohl's work is unique in that it combines military and cultural history with a narrative that is both precise and enjoyable. She has balanced military adventures with explosive cultural issues. There are varieties of racism, religion, and politics contained in the soldiers' lives. Kohl sets aside stereotypes and offers a complex but accessible narrative of civilian soldiers in a civil war. Her training in anthropology is a strength. Her deeply researched The Prairie Boys Go To War: The Fifth Illinois Cavalry relies upon diaries, letters and memoirs to reveal the rubbed-raw emotions of the cavalrymen.