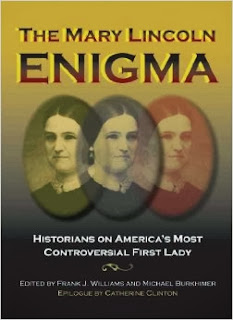 Fourteen historians tackle the popular misunderstandings associated with Mary Todd Lincoln. In both popular culture and academic circles, the First Lady, verifiers and sympathizers. The Mary Lincoln Enigma: Historians on America's Most Controversial First Lady offers a variety of interpretations of Abraham Lincoln's wife, who had a role in both politics and society.

Mary Lincoln as a sibling, as a child in a household with slaves, a a socialite and hostess, as a mother with sons and as as a European traveler are considered. Her depiction by novelists and graphic artistic are offered. Each of the authors have written books on the Lincolns.Each of the essays are between 20 and 40 pages.  The authors' narratives are direct and to the point, neither meandering  nor discursive.

In is not necessary for readers to have an Abraham or Mary Lincoln biography under their belt. No insider information is needed to enjoy The Mary Lincoln Enigma: Historians on America's Most Controversial First Lady. Several of the essays have appeared in other publications and some may have been portions of other chapters in other books. Overall, The Mary Lincoln Enigma functions as a kaleidoscope for Mary Lincoln's life.
Posted by Rea Andrew Redd at 6:26 PM