New and Noteworthy--- Did John Brown Get What He Wanted? An Emancipation Army With Armed African Americans? 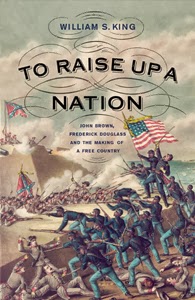 To Raise Up a Nation: John Brown, Frederick Douglass, and the Making of a Free Country, William S. King, Westholme Publishing,  664 pages, 40 b/w illustrations and maps, $35.00.

From The Publisher:  Drawing on decades of research, and demonstrating remarkable command of a great range of primary sources, William S. King has written an important history of African Americans’ own contributions and points of crossracial cooperation to end slavery in America. Beginning with the civil war along the border of Kansas and Missouri, the author traces the remarkable life of John Brown and the personal support for his ideas from elite New England businessmen, intellectuals such as Emerson and Thoreau, and African Americans, including his confidant, Frederick Douglass, and Harriet Tubman.
Throughout, King links events that contributed to the growing antipathy in the North toward slavery and the South’s concerns for its future, including Nat Turner’s insurrection, the Amistad affair, the Fugitive Slave law, the Kansas-Nebraska Act, and the Dred Scott decision. The author also effectively describes the debate within the African American community as to whether the U.S. Constitution was colorblind or if emigration was the right course for the future of blacks in America.
Following Brown’s execution after the failed raid on Harper’s Ferry in 1859, King shows how Brown’s vision that only a clash of arms would eradicate slavery was set into motion after the election of Abraham Lincoln.

Once the Civil War erupted on the heels of Brown’s raid, the author relates how black leaders, white legislators, and military officers vigorously discussed the use of black manpower for the Union effort as well as plans for the liberation of the “veritable Africa” within the southern United States. Following the Emancipation Proclamation of January 1863, recruitment of black soldiers increased and by war’s end they made up nearly ten percent of the Union army, and contributed to many important victories.

To Raise Up a Nation: John Brown, Frederick Douglass, and the Making of a Free Country is a sweeping history that explains how the destruction of American slavery was not directed primarily from the counsels of local and national government and military men, but rather through the grassroots efforts of extraordinary men and women. As King notes, the Lincoln administration ultimately armed black Americans, as John Brown had attempted to do, and their role was a vital part in the defeat of slavery.

Blurb: “In his fast-paced and deeply researched To Raise Up a Nation, William S. King narrates the coming of the Civil War, the war itself, and the emancipation process, through the intertwined lives of John Brown and Frederick Douglass. King’s stimulating, well-written account draws upon telling anecdotes and pen portraits to document America’s dramatic story from Harper’s Ferry to Appomattox, a drama personified by the lives of Brown and Douglass."  John David Smith, Charles H. Stone Distinguished Professor of American History, University of North Carolina at Charlotte, and author of Lincoln and the U.S. Colored Troops.

CWL:  As the historiography grows and as schools of historical thought reveal the stereotypes used to misrepresent John Brown, King possibly completes the circle to what people in 1859 understood Brown to be and what Brown himself claimed to be: a captain without a company of soldiers, in an army that was yet to be raised, fighting for country that was still being formed. CWL is  looking forward to several days with To Raise Up a Nation: John Brown, Frederick Douglass, and the Making of a Free Country.
Posted by Rea Andrew Redd at 10:21 AM